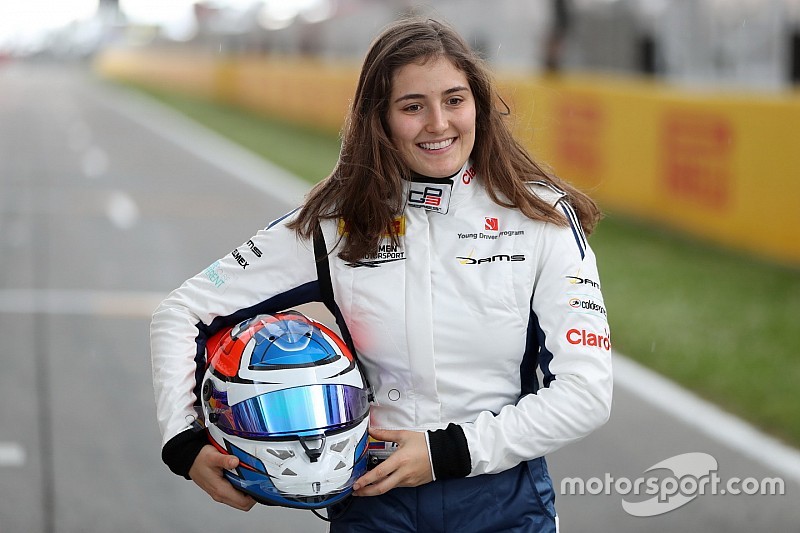 Sauber F1 development driver Tatiana Calderon says the fact she’s been picked up by a Formula 1 team will help her focus on delivering results in GP3 this year.

The Colombian driver, who was recruited by Sauber earlier this year, is embarking on her second GP3 season, having made the switch from Arden to DAMS for 2017.

Last year, Calderon scored two points with a brace of 10th place finishes at Hockenheim at Monza, and has set her sights on becoming a regular presence in the top 10 in her sophomore campaign.

And she believes the fact that she has a Sauber development driver contract in her pocket means she can focus on the job in hand, without having worry about impressing observers.

"Actually, I feel less pressure than last year," Calderon told Motorsport.com. "You do GP3 because you want to be picked by one of the F1 teams, and I managed to do that.

"You get that confidence that they have picked you. Now I can focus just on driving and performing.

"Of course Sauber wants to see an improvement from last year with their support, and I want to show what I can do with the right guidance.

"To improve from last year, to be there consistently scoring points, being in the top 10, that would be a good step up.

"Of course I want to be on the podium, but first we have to find out where we are and then we set ourselves bigger goals."

Qualifying was Calderon's main weakness in 2016, as she recorded her best grid position of 12th in the opening round of the season at Barcelona and only averaged 17th on the grid across the year.

The 24-year-old says she has been working hard to improve on this area in winter testing, and believes that progress made by DAMS should help her to boost her one-lap pace.

"[Qualifying] was our main focus really during the tests," added Calderon. "I think I'm getting better at it, but you never know until you have the pressure of a qualifying session, there's nothing like it.

"It will be really hard again, it's always difficult with the traffic, and even if there's no degradation in the tyre there's still a difference between your first push-lap and your second one.

"But DAMS have worked a lot in developing that one-lap pace, so hopefully that will make the preparation much better and allow us to be straight on the pace in qualifying."

Calderon will continue as a Motorsport.com driver columnist this season - look out for her columns in English and Spanish in the coming weeks and months.