What a weekend for Carlin – a fantastic one-two in Race 1 with Emil Bernstorff finishing second – and today the Brit went one better by pocketing his debut win in the category in dominant style. Jimmy Eriksson (Koiranen GP) drove a determined race to finish second and Richie Stanaway (Status Grand Prix) took the final spot on the rostrum.

Glorious blue skies and warm temperatures were perfect racing conditions for the second GP3 race of the weekend in Austria with Carlin’s Luis Sa Silva starting from reverse pole. However, Marvin Kirchhöfer’s morning did not start well – the German rookie stalled on the pre-grid and despite the best efforts from his ART Grand Prix team, he was unable to start the race. Alex Fontana and Alfonso Celis. Jr started from the pitlane after grid penalties issued after Race 1.

Sa Silva from Angola made a good start but Nick Yelloly (Status Grand Prix) made a better one as the two diced wheel to wheel on the lap one with the Brit passing the Carlin driver on the second lap for the lead of the race. Sa Silva came back at him though in a great duel and re-claimed P1. GP3 Series leader Alex Lynn suffered a puncture after being tagged on the opening lap and had to pit for new Pirelli rubber and finished outside of the points. 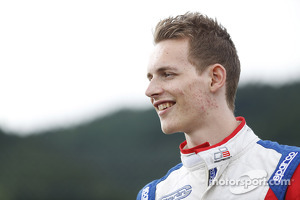 At the front of the race, Jenzer Motorsport’s Mathéo Tuscher tried to make a move on Sa Silva and the two made contact, with the Swiss driver’s car going airborne for a quick moment. His race was over, while Sa Silva pitted to repair damage to his car. This incident caused a bottleneck to the drivers behind with Bernstorff grabbing the lead of the race and a swap of positions between the Status Grand Prix drivers with Kiwi Stanaway demoting Yelloly. Eriksson also found a way through to move into third ahead of the Brit during the incident.

Arden International’s Jann Mardenborough who was running in the points spun off into the gravel and retired from the race, whilst Bernstorff at the front began to build a margin to Stanaway and Eriksson. Trident’s Roman De Beer moved up the order and was up to fifth at the midway point of the race. Stanaway was soon in the clutches of Eriksson with the Swede making the move stick for second position.

The battle for the third became a four-way battle with Stanaway, Yelloly, De Beer and Patric Niederhauser (Arden International) all fighting fiercely for the podium place. Bernstorff held an eight second advantage over his next rival Eriksson, whilst South African rookie De Beer got the better of Yelloly to rise to P4.

At the chequered flag, the day would belong to Bernstorff and Carlin after signing off with a stylish win. Eriksson re-enforced his position in the standings to achieve a second podium of the weekend, whilst Stanaway took his second podium of the season. Trident and De Beer were all smiles as they celebrated their first points of the 2014 GP3 campaign, ahead of Yelloly, Niederhauser, Patrick Kujala (Marussia Manor Racing) and Dino Zamparelli (ART Grand Prix) completing the final points positions.

Lynn holds the lead in the Drivers’ Standings on 62 points but Eriksson has gained on him (49). Stanaway lies third on 45 with Bernstorff moving into contention on fourth with 36 after also pocketing two extra points for the fastest lap today. Carlin head the Teams’ Standings with 102, ahead of Status Grand Prix (61), Koiranen GP (49) and Art Grand Prix (45) respectively.

The third round of the GP3 Series will take place at the home of British motorsport: Silverstone! Enjoy the next instalment of the thrilling GP3 Series on 04-06 July.