Visser and Mason will make their GP3 race debut at the Circuit de Catalunya on 10th May 2014.

Hilmer Motorsport is pleased to announce that Beitske Visser and Nelson Mason will join the team for the opening event of the 2014 GP3 Series in Barcelona. The 26-year-old Canadian from Niagara Falls was already testing with the German team at the pre-season test days in Jerez and Barcelona and has shown a promising performance. Mason will compete with Hilmer Motorsport the whole 2014 season.

Mason began his racing career at the age of five years in Canadian National Motocross. To increase his track time, he has competed in various racing categories throughout his career and was competing in different Karting Championships and European Formula Championships. In 2013, he achieved three race wins and four pole positions in European Formula Open and raced in the prestigious 60th Macau Grand Prix. 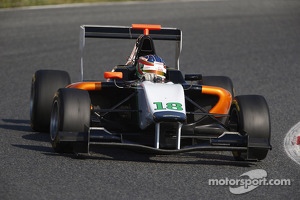 For Beitske Visser it will be the first appearance in a GP3 race event. The 19-year-old girl from the Netherlands will join Hilmer Motorsport for the season opener on the Circuit de Catalunya and the German squad plans to give her other opportunities to show her talent.

From 2000 until 2012, Visser was competing in various karting championships until she moved to ADAC Formula Masters and could achieve two race wins. In two consecutive years Visser ended the season in eight position of the championship and as a result, she became the first woman in motorsport who was supported by Red Bull.

Nelson Mason will run the #18 GP3 car and Beitske Visser will be at the wheel of the #19 GP3 car of Hilmer Motorsport. Both will make their GP3 race debut at the Circuit de Catalunya on 10th May 2014.

Franz Hilmer, Team Principal of Hilmer Motorsport: "We want to give a warm welcome to Beitske Visser and Nelson Mason and we are very happy to have them in our team. We worked with Nelson during the pre-season test days in Jerez and Barcelona and we were quite happy with his performance. He was collecting important data and information about the car and he gave us a lot of feedback which helped us to improve the car step by step. Beitske Visser is a very talented young driver and we think that there should more girls in motorsport.

That’s why we want to give Beitske a chance to show her talent. At the moment, it is only planned that Beitske is racing with us in Barcelona. But there might be also chance to contest with her at some other race events. We are confident that we will work together well with our drivers during the season and that we can score some points for the championship. It will be our rookie season in GP3 Series, but we are working very hard to be a serious competitor.”

Nelson Mason, Driver #18 Hilmer Motorsport: “I am extremely happy to be part of Hilmer Motorsport and to compete with the team in GP3 Series this year. I would like to thank the whole team for offering me this opportunity and all the work at the pre-season test days in Jerez and Barcelona. It is a tremendous honour to join the team in the GP3 Series, and I hope to uphold the success that the team has achieved so far in GP2. I’d really like to thank my family and supporters for all the tireless work to get me here and everyone behind the scenes.”

Beitske Visser, Driver #19 Hilmer Motorsport: “I am very happy to get the opportunity to do this race with Hilmer Motorsport in GP3 Series and I want to thank the team to make this happen. It is going to be a lot of hard work because it is the first time for me with this car and tyres, but I know the track in Barcelona very well. I can’t wait to get out on track on Friday!”

Trummer returns to GP2 with Hilmer