Carlin’s Alex Lynn on top in both test sessions in Estoril.

GP3 rookie and new signing for Carlin topped both the morning and afternoon test session in Portugal today with a best laptime of 1:28.552.

Following the deluge of rain overnight, the drivers and teams arrived at Circuito Estoril to a soaking wet track despite blue skies and sunshine above. There was one change to the driver line-up with Roberto Merhi from Spain replacing Richie Stanaway in the Status GP machine. Nick Yelloly and Merhi were first to test the conditions along with Trident’s Roman De Beer.

There was a short interruption when Arden International’s Robert Visoiu spun and stopped on track. At the midway point of the morning test, the drivers opted for slick Pirelli Medium tyres as the times began to tumble. Trident’s Victor Carbone held P1 for a short time before Jenzer Motorsport’s Melville McKee claimed the head of the timings. 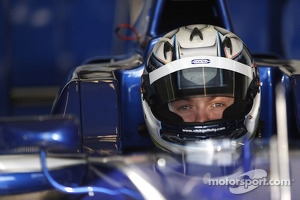 There was a brief stoppage for a second red flag when Dino Zamparelli stopped on circuit and once the action continued, it was Yelloly who surged to the top of the standings lapping in the 1m30’s. De Beer then set the quickest lap with Visoiu lapping a tenth shy of the South African.

ART Grand Prix’s Marvin Kirchhofer became the first driver to break into the 1m29’s as the positions swapped every second at the top of the timesheets with drivers finding more speed on a drying track. Emil Bernstorff was leading the timesheets when Zamparelli stopped on the circuit for a second time with less than 10 minutes remaining.

Following the brief red flag period, it was a quick dash to see if anyone could improve on their time and Lynn was the man to do so, snatching P1 at the chequered flag. Bernstorff, Zamparelli, McKee, Yelloly, Kirchhofer, Jimmy Eriksson, Alex Fontana, Visoiu and De Beer completed the top ten.

The predicted rain didn’t arrive and Eriksson was first to set the pace in the afternoon session. The Swede then had an excursion into the gravel bed, as did McKee and Santiago Urrutia shortly after, all covered by red flags.

With some drivers concentrating on qualifying and race simulations, there was a change in the standings with Lynn again finding himself fastest, ahead of his Angolan teammate Sa Silva. De Beer split the pair, before the Brit further improved on his personal best to record the fastest time of the day with a 1:29.066.

Bernstorff was on a charge and broke into the 1m28’s until Lynn came back at him and reclaimed P1. Behind the Carlin duo at the chequered flag were: Eriksson, De Beer, Sa Silva, Dean Stoneman, Fontana, Zamparelli, Yelloly, and Kirchhofer.

The second GP3 test will take place at Circuito Jerez in Spain on 10-11 April and will mark the first appearance for Hilmer Motorsport.

How new F3 has learned from F2's mistakes

Formula 3 racing will replace GP3 on the Formula 1 support bill in 2019 with a new car. It will be promoted by the same organisation that runs Formula 2, which has learned from the issues that plagued the second-tier championship's new car in '18.