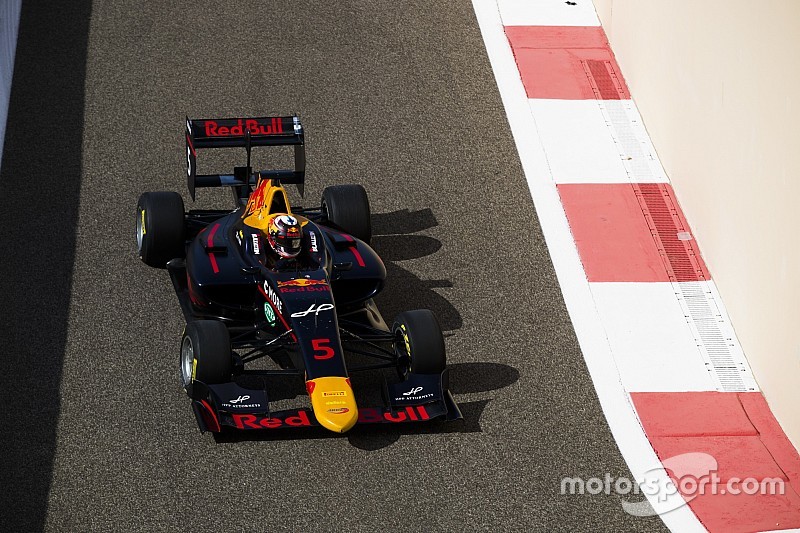 Kari had to weather two safety car periods before sealing his first GP3 win, which is the first non-ART feature race victory of 2017.

Arjun Maini completed the podium after a late-race puncture dropped Leonardo Pulcini down the order.

At the start, polesitter Russell defended hard against Pulcini off the line, but as the champion covered off one Arden car, another in Kari swept around the outside of both to seize the lead going through Turn 1.

The Finn raced clear, and his teammate demoted Russell to third by going around the outside of the Mercedes junior into the left-hand Turn 8.

In the pack behind, Fukuzumi was very slow away and that put the Honda driver well down the order.

Things got much worse as he clattered into the back of Giuliano Alesi and lost his front wing as the cars bunched up going through the Turns 8/9 chicane, seconds after the Trident driver had his own front wing damaged in the melee.

Kari and Pulcini began to pull clear of Russell but the race was neutralised by the virtual safety car when Marcos Siebert stopped off the track at Turn 5.

That allowed Russell to close up to Pulcini and the Briton attempted to steal second at the penultimate right-hander as the VSC ended, but had to jump over the kerbs and shot wide as a result.

The top three – and Maini – raced clear of the squabbling rest, with Kari gradually extending his lead over Pulcini.

But at the conclusion of a second VSC period – caused by Alesi stopping on-track on the run out of Turn 14 – Russell again got the jump on Pulcini, this time sweeping around the outside on the approach to the final corner to take second.

From there, Russell could not get close to Kari and the 18-year-old – backed by Red Bull but only until the end of the year – took the win by 2.7s.

Pulcini’s left-rear tyre let go as he ran down the main straight on the penultimate lap, which gifted Maini third.

Macau Grand Prix winner Dan Ticktum lost out to Maini early on but recovered to fourth by battling his way past Dorian Boccolacci – the pair banging wheels at Turn 12.

Alessio Lorandi and Steijn Schothorst were fifth and sixth after their own dramatic scraps with Boccolacci, who came home seventh.

Anthoine Hubert finished eighth and has reverse-grid pole despite slowing along the main straight mid-way through the race before getting up to speed again.

That means he can steal third place in the championship from Fukuzumi – who finished 15th and could therefore not eat into Jack Aitken’s advantage in their fight for second.

Aitken, who qualified down in 15th, was in the thick of the action on lap one but did not make progress up the order and came home 14th.