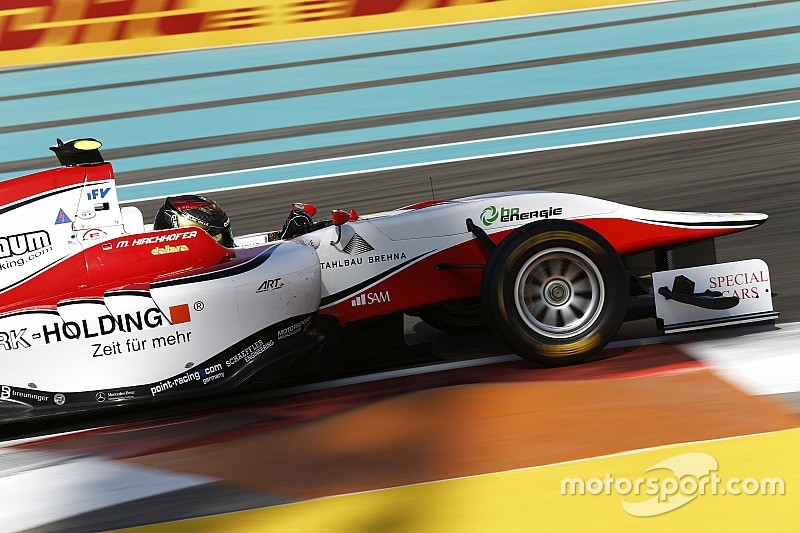 ART Grand Prix driver Marvin Kirchhofer inherited victory in the penultimate race of the GP3 season at Yas Marina, with a time penalty for Esteban Ocon setting up a Sunday title showdown.

Ocon needed to outscore Luca Ghiotto by 16 points to wrap up the title with a race to spare, and was in position to do so at one stage.

But a five-second penalty for an early track limits offence meant that the Frenchman, who led every lap of the race, did not even get a podium finish.

As the lights went out, Ocon got a solid enough start off pole position but it was a better getaway for Kevin Ceccon - and the Italian looked set to challenge the Frenchman into Turn 1.

Defending the spot, Ocon attempted to take a wider line and ended up running off-track on the outside of the corner, keeping his foot stuck in and re-emerging with a solid lead before Turn 2.

Ideally for him, rival Ghiotto had a miserable start, slipping behind the Koiranen machine of Jimmy Eriksson - and then allowing Emil Bernstorff through as well.

As Bernstorff cleared Eriksson, Ghiotto looked to do the same, but did not get the chance, the safety car coming out for the stranded car of Adderly Fong.

Ocon headed the restart, with Ghiotto divebombed by Campos driver Alex Palou into Turn 1 - albeit the Trident man stuck to his line and was back into sixth a corner later.

Subsequently, his chances took an upturn when the stewards announced an investigation into Ocon's Turn 1 move at the start - and immediately levied the Frenchman with a penalty.

On Lap 8, Ghiotto - who appeared to be struggling for pure pace at that stage - inherited a spot when Ceccon came to a halt out of P2, bringing out the virtual safety car.

The status quo was then maintained at the restart, although Ghiotto was suddenly in with a chance of finishing ahead of Ocon.

Needing to be within five seconds, he got as close as 5.4s, but couldn't make further inroads - and then had to give up on chasing Ocon after a massive lock-up on lap 15, which put him under pressure from Matt Parry.

Meanwhile, Ocon himself attempted a late push to pull a gap and gain position in the race classification, but despite second-placed Kirchhofer coming under pressure from Bernstorff, the duo kept up enough to take advantage of the Frenchman's penalty at the chequered flag - as did Eriksson.

Ghiotto took fifth ahead of Parry, Ferrari junior Antonio Fuoco and Palou, who will start from reverse-grid pole tomorrow.

An early benchmark lap from Ocon was unheaded, giving him two additional points at the end and placing him six points clear of Ghiotto before the decider.