With a finale in crescendo, like they say in the opera, Venezuela GP Lazarus concludes in Singapore its debut season in GP2 Series, a year in which the Italian team has been able, working very hard, to grow race by race. The result in the fascinating street circuit in Singapore was not in line with expectations, but there were also reasons to be satisfied: Sergio Canamasas, both in race 1 and in race 2, was very fast and was fighting in the top ten, but two drive trought have affected both race 1 and race 2. The weekend of Rene Binder was affected by a spin in the first lap of the first race that did not allow him even to complete a single lap and gain experience in a very challenging track, but in race 2 Rene was very fast (only 4 tenth slower than the race winner). 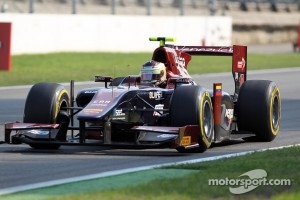 “Of course I’m not satisfied with the results, but I have to say that our first time in Singapore was quite good in terms of performance. Unfortunately Canamasas, both in race 1 and in race 2, had two drive through that compromise his race, while Rene had a technical failure in the qualifying session and make a mistake in race 1 in the first lap. However, in race 2 Binder demonstrate to be very fast and his race pace was only a few tenth slower than the winner pace. I want to say thanks to all the Venezuela GP Lazarus staff and to our drivers, Sergio and Rene: now it’s time to think in the next season!”

"Unfortunately I made two mistakes, but in fairness, I have to say that our race weekend was a bit spoiled by a technical failure in qualifying. It was an electronic problem with our fly by wire throttle that was caused by electromagnetic impulses. And, of course, it was my first time on Pirelli Supersoft tyres. However, I think my race pace on Sunday was quite ok, as I was just 4 tenth slower than the race winner Guido van der Garde. At least my speed was there and I have no worries, that if we can accomplish a reasonable testing programme we can deliver some good results in 2013. Coming back from Singapore I want to thank Tancredi and his team Venezuela GP Lazarus for their great support during my first three race weekends in the official feeder series of Formula 1."

Quaife-Hobbs to test GP2 in Barcelona and Jerez

Marciello returns to single-seaters for Red Bull Ring F2 round