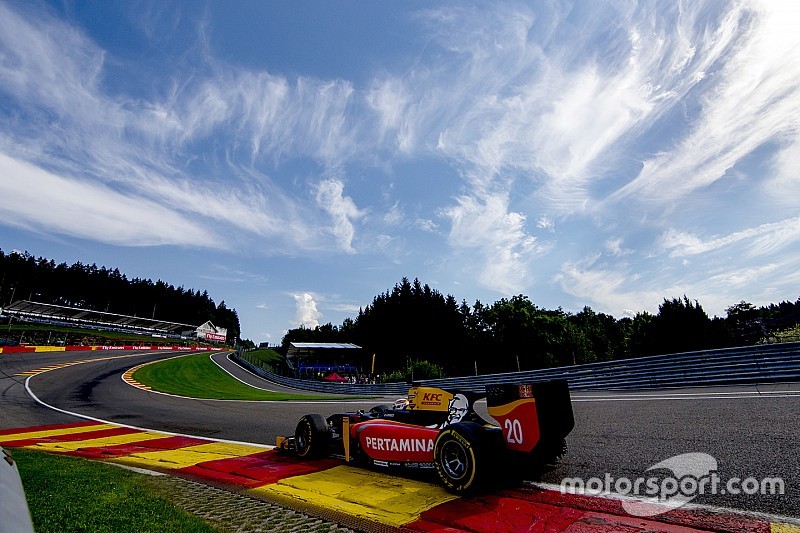 Prema Racing's Antonio Giovinazzi made up for a missed opportunity in Saturday's feature race to win the Sunday GP2 sprint at Spa-Francorchamps.

The Italian worked his way around Gustav Malja to emerge victorious as teammate Pierre Gasly, who had won on Sunday, fought through to fourth despite front wing damage.

Just as on Saturday, Malja was again at the head of the field into Turn 1, this time making use of his reverse-grid pole position to control the start.

Meanwhile, Giovinazzi, who had bogged down from pole in the first race, managed a much better getaway the second time around, passing Luca Ghiotto and holding off his compatriot on the run down to Les Combes.

It soon became a case of deja vu for Malja, the Swede again trying to hang on to his lead while under DRS attack from a Prema driver.

And while Malja managed to hold station for a few laps, Giovinazzi's seemingly inevitable pass duly followed on lap eight, the Italian going round the outside at Les Combes.

It took Giovinazzi a few more laps to break out of DRS range, and the Italian duly saw out the 18-lap race distance to pick up the third win of his rookie season.

Malja brought it home for his first podium in GP2, with another rookie Ghiotto driving a calm race to third.

The most intense battle was going on further down in the pack, however, with championship contenders Oliver Rowland and Sergey Sirotkin getting ahead of points leader Gasly for P8 and P9 early on.

Gasly kept with them, picking off Sirotkin, only to tap Rowland at Les Combes and damage his own front wing, with Sirotkin getting back ahead.

But the Red Bull junior still had the pace, going past Sirotkin at La Source and then pulling off a spectacular pass on Rowland round the outside of Eau Rouge.

Having passed Rowland, Gasly then outbraked Alex Lynn and Jordan King in quick succession, catching up to the battling Russian time duo of Raffaele Marciello and Artem Markelov.

The Frenchman picked off Markelov on lap 15, when the Russian ran wide, and then passed Marciello on the inside of Bus Stop to cement fourth place.

While Marciello held on to fifth, Markelov's race unravelled in the final laps.

The Russian was first passed by Lynn and King, who took sixth and seventh, before being hit by Sirotkin in the final corner of the last lap, the ART driver braking late while battling fellow Renault protege Rowland.

Rowland took eighth in the end, with Sirotkin in ninth and the incident under investigation.

As the championship leaves Spa, Gasly's closest rival is now teammate Giovinazzi, with 129 points to the Frenchman's 146.

Sirotkin, who had entered the weekend as joint points leader, is down in fourth with 115 points, having also been passed by Marciello at 120.