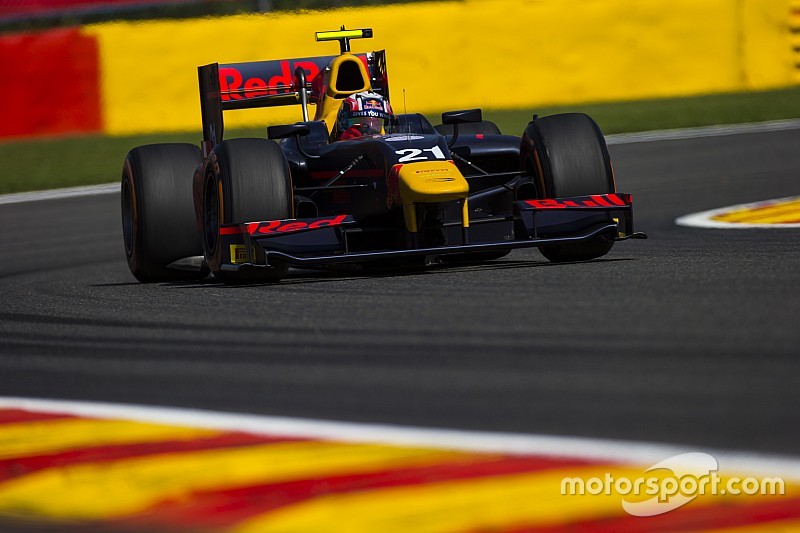 Red Bull junior Pierre Gasly pulled off two passes for the lead to take victory in the GP2 feature race at Spa-Francorchamps.

In doing so, the Frenchman, who now has three wins from the last four feature races, has returned to being the sole leader of the championship, as rival Sergey Sirotkin could only take P9.

The Prema duo of Antonio Giovinazzi and Gasly had lined up first and second on the grid after dominating qualifying, but neither would lead into Turn 1.

Instead, Giovinazzi suffered massive wheelspin and bogged down, with third-placed Rapax's Gustav Malja darting past and taking the lead.

The Swede was a second up the road after the opening lap, but Gasly, maintaining second place off the line, did not allow Malja to escape DRS range.

He was challenging for the lead shortly thereafter, finally picking off Malja round the outside into Les Combes on Lap 5.

Norman Nato followed through a lap into second a lap later, with Malja and Nato's teammate Jordan King then opting to take to the pits at the earliest possible opportunity.

Crucially, the Racing Engineering pit crew allowed King to rejoin ahead of Malja - and, when Gasly pitted a lap later, King's undercut allowed him to close in and immediately execute a pass on the Kemmel straight.

But Gasly fought back on Lap 9, again working the outside of Les Combes to take the lead and then quickly making a safe gap.

With Gasly, King and Nato leading those who had started on the softer compound, the trio soon encountered traffic - with Gasly slowly but surely increasing his advantage and King coming under pressure from his teammate.

The three drivers eventually cycled back to the front when Artem Markelov, who had passed Sirotkin to lead much of the race, came in on Lap 18.

Again, the VSC proved controversial, King voicing a complaint that Gasly hadn't slowed enough as the Frenchman's lead grew from three seconds to almost eight seconds, which was enough for him to ease to the chequered flag.

With Nato dropping out, Alex Lynn picked up his first feature race podium of the season, secured with a double pass on Malja and an off-sequence Daniel de Jong on the Kemmel straight early in the race.

Raffaele Marciello took fourth, with teammate Markelov scything his way through the field after his late stop to claim fifth.

Giovinazzi recovered to finish sixth, ahead of teammate Luca Ghiotto and Malja, who secured reverse-grid pole in eighth.

The final laps of the race featured a scintillating battle between Renault juniors Sirotkin and Oliver Rowland, both running on a hard-soft strategy and held up by Sergio Canamasas on well-worn tyres.

The fight culminated in collision in the final corners as Canamasas squeezed Rowland to the inside of the second part of Bus Stop and the duo locked wheels on corner exit.

That allowed Sirotkin to get through, the ART Grand Prix driver taking P9 despite minor contact with Rowland's car, the Briton bringing it home in P10.