Mick Schumacher passed early leader Yuki Tsunoda to claim his second Formula 2 feature race victory of the 2020 season at Sochi and extend his lead in the drivers’ standings. 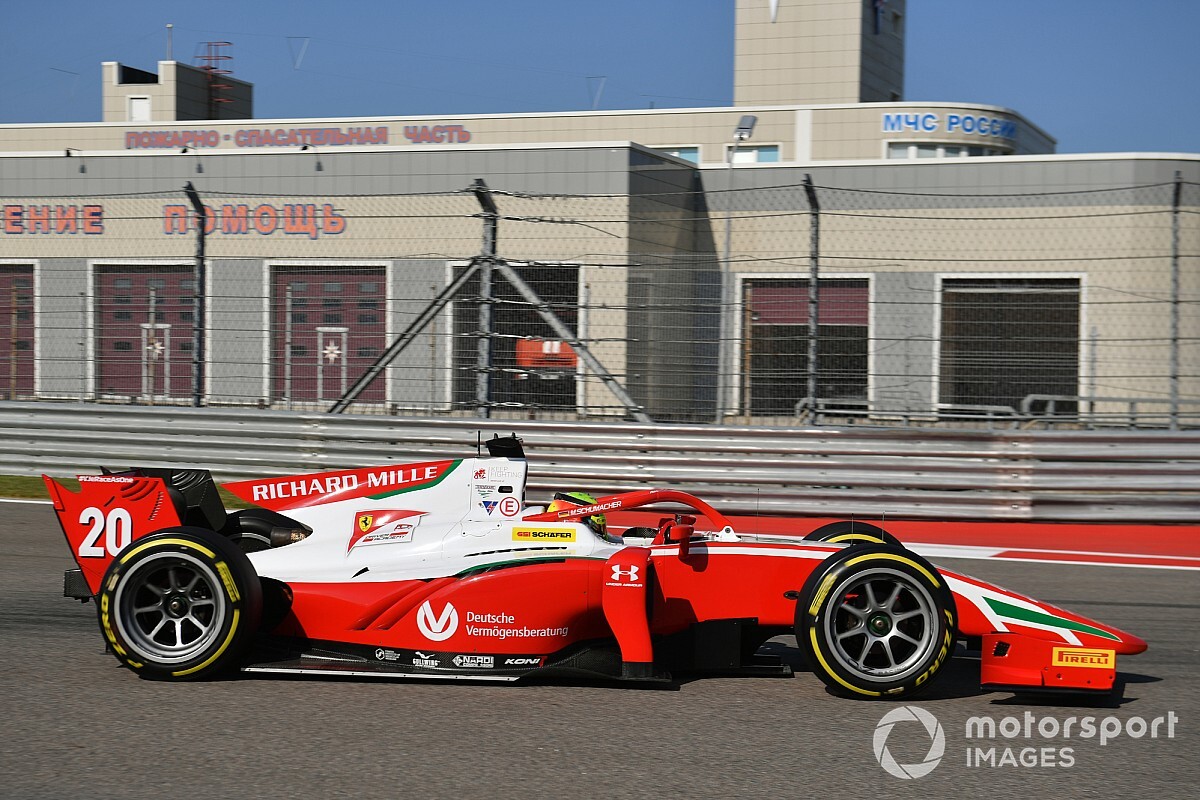 Tsunoda made a clean start from pole position to lead the field into Turn 2 - the first braking zone at the track - while Schumacher cleared the second Carlin of Jehan Daruvala to slot himself into second position.

On lap 5, Schumacher rapidly closed in on Tsunoda with purple times in sectors 1 and 2, but the Japanese driver managed to fend him off with a quicker run in the final part of the lap.

Tsunoda then proceeded to set a series of fastest laps to build a two-second lead out front, which he maintained when the two drivers stopped together on lap 8 for medium tyres.

For the next 12 laps it appeared Tsunoda had the race under control, the Carlin driver maintaining his advantage over Schumacher without any troubles, as the duo circulated well clear of their rivals.

However, Tsunoda then got stuck behind medium tyre-shod Artem Markelov, who was yet to make his pitstop, allowing Schumacher to come back into play.

Having brought the deficit to under half a second, Schumacher wasted no time to pass Tsunoda, selling a dummy as they approached Turn 2 on the following lap. Tsunoda ran deep into the corner while trying to protect the inside line, allowing Schumacher to cut across the track and swoop past him for the lead.

Virtuosi’s Callum Ilott, who had leapfrogged Jehan Daruvala by pitting two laps later than the Carlin driver, also managed to clear Tsunoda on the same lap, putting the championship rivals into first and second positions.

But Ilott could do little about the pace of Schumacher, who enjoyed an untroubled run from there on take a comfortable six-second victory.

Ilott eventually fell into the clutches of Tsunoda, who pulled off a brilliant move around the outside of the Virtuosi driver at the long Turn 3 left hander to snatch second position.

The British driver was lucky to hold onto the final podium spot in the end, crossing the finishing line just 0.025s clear of the Hitech of Luca Ghiotto.

Daruvala eventually finished fifth after starting from the front row, recording his second-best finish of his rookie F2 campaign.

The Campos of Jack Aitken enjoyed a lengthy battle with Virtuosi’s Guanyu Zhou, the two drivers running long into the first stint on medium tyres.

Zhou made several attempts at passing Aitken, but the Campos driver put up a stern defence to hold his position, finishing sixth.

Zhou slipped to eighth in the final classifications, having lost a position to the Hitech of Nikita Mazepin while trying to pass Aitken into Turn 2 on lap 16.

Marcus Armstrong was the lead ART driver in ninth, while Dan Ticktum completed the points scorers for DAMS.

Robert Shwartzman, who was fourth into the championship heading to his home round in Russia, finished down in 11th after losing time with a slow right-rear tyre change as Prema attempted to double stack its drivers.