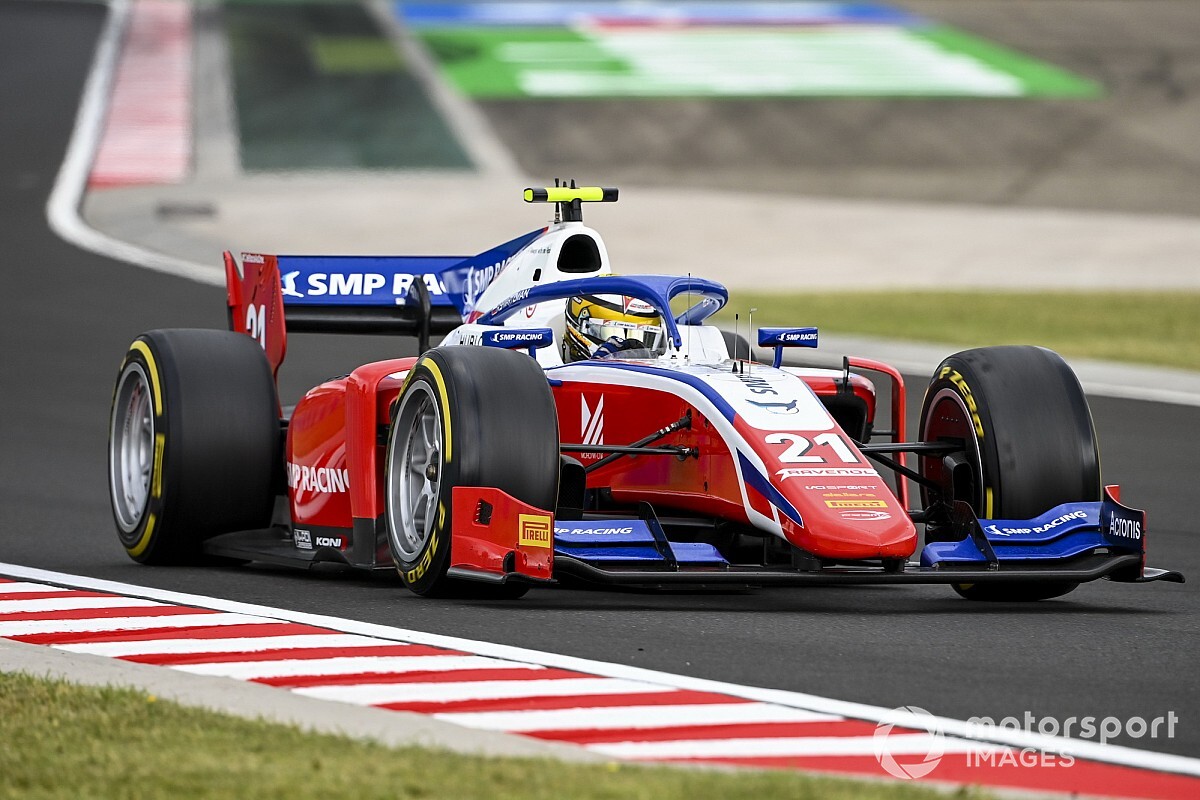 Robert Shwartzman produced a fantastic performance at the Hungaroring to take his second successive FIA Formula 2 Championship feature race win, this time from 11th on the grid.

Prema Racing-run F2 rookie Shwartzman made the most of running an alternative tyre strategy, which he was forced into by his lowly position on 11th of the grid, after being scuppered by a red flag in qualifying.

The race was massively affected by tyres – it was the first dry running for anyone at the track with the new 18-inch wheels - and the offset strategy was proven to be superior as Nikita Mazepin, from 16th on the grid, burst through to take second for Hitech GP.

Callum Ilott led the early stages in his Virtuosi Racing machine from Williams F1 protege Dan Ticktum, but DAMS driver Ticktum was the first to head to the pits for his tyre change just as a second safety-car period ended.

Ilott followed suit one lap later, but Schumacher, who had established himself in third in the early going, ran five tours longer in order to minimise the distance he would have to run on the medium.

Schumacher emerged from the pits in front of fellow Ferrari junior Ilott, but was passed by the Briton as he got his tyres up to temperature.

At this stage, those who had switched to the medium were only taking incremental gaps out of Shwartzman. A few laps after his stop, Schumacher blew past Ilott on the run to Turn 1 for what appeared to be the net lead, but soon Shwartzman began extending the margin, despite still being on his initial set of Pirellis.

Shwartzman pitted with 10 laps remaining, and then blundered by locking up into Turn 1 as he emerged from the pits.

Nevertheless, he was able to make short work of Luca Ghiotto, Ilott and then Schumacher, and pulled out a 5.0-second advantage within one lap of taking the lead.

Mazepin pitted one lap later than Shwartzman, and similarly went on a tear to complete a Russian 1-2, albeit 15.5s adrift of the victor by the flag.

"I had a different strategy which worked out really good," said Shwartzman. "Every lap was on the limit [on the medium tyres]. When I came out of the pits I locked up – that was unacceptable, but I had much fresher tyres. I had a massive vibration [from the flat spots]."

Schumacher proved Prema as the master of both tyre strategies by taking third by 9.7s from the next of those to have started on the soft tyres.

That was Ghiotto, who made it a Hitech 2-4 after surviving an early clash with ART Grand Prix driver Christian Lundgaard.

Lundgaard sustained a puncture in the collision, and as teammate Marcus Armstrong passed him the Kiwi inadvertently tripped up Artem Markelov, plunging him into the barrier to cause the second safety car.

Two more of those who finished on the soft – Felipe Drugovich (MP Motorsport) and Jehan Daruvala (Carlin) – were fifth and sixth, thanks to a last-lap move by Drugovich.

Louis Deletraz (Charouz Racing System) passed the tyre-hobbled Ilott for seventh on the last lap, while Ticktum – who was first to fade on the mediums – managed to repass the other Virtuosi car of Guanyu Zhou for ninth.

The first safety car was caused by Roy Nissany braking too late at Turn 1 and harpooning Trident teammate Marino Sato and himself out of the race.