Bahrain F2: Shwartzman eases to win, no points for Ilott

Ferrari junior Robert Shwartzman took a lights-to-flag win in the Formula 2 sprint race in Bahrain, as an incident involving the main title rivals swung the advantage back in Mick Schumacher’s favour. 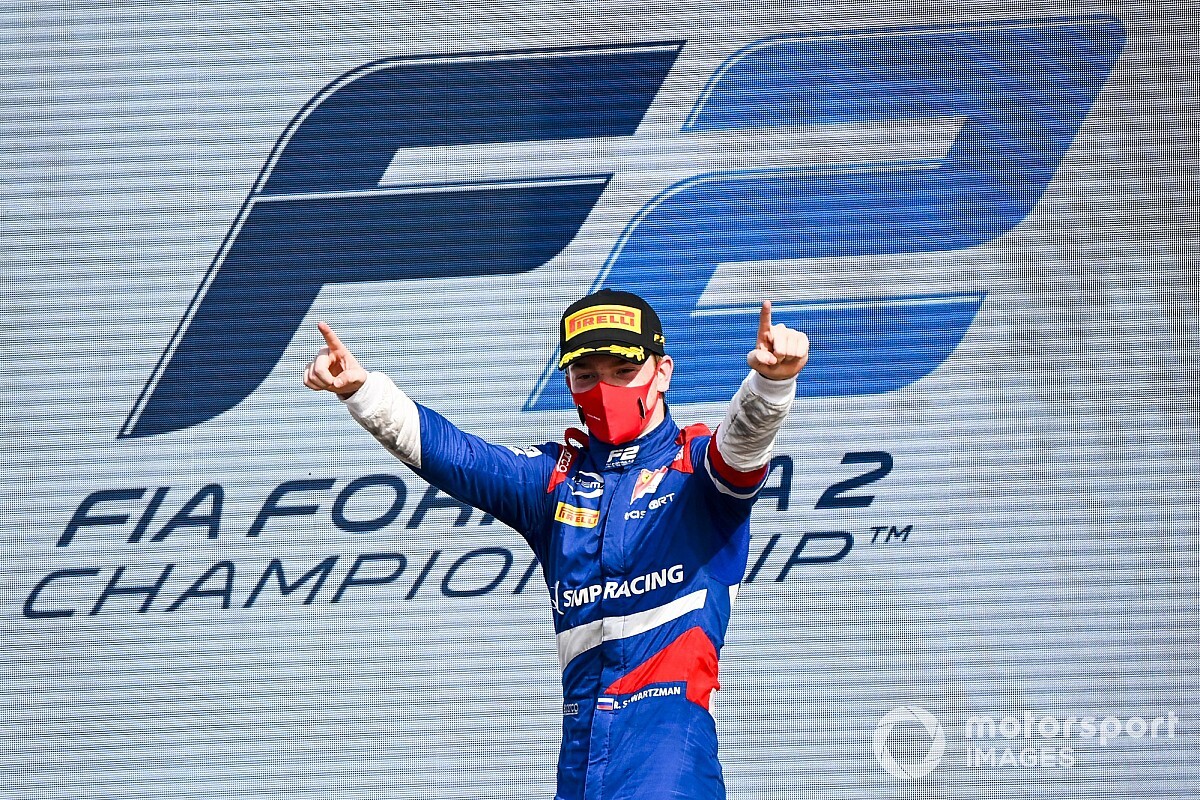 Championship leader Schumacher was running fifth and points runner-up Callum Ilott was sixth when the race restarted following a safety car on the eighth lap of 23.

Schumacher locked up massively into the tight Turn 10 left-hander, and Ilott - after his own lock-up - appeared to dive to the left to avoid the Prema Racing machine.

That set Ilott on a collision course with fourth-placed Red Bull Junior Jehan Daruvala, and the unfortunate Indian was a blameless casualty as his Carlin machine was harpooned out of the race.

Ilott pitted for a replacement front wing, and was further hampered when he was given a drive-through penalty for the incident, although the Virtuosi Racing ace was too far behind to make it into the points-scoring positions anyway.

Schumacher bumped wheels with Ilott as he scrambled free of the incident, and then later on had further contact with the ART Grand Prix car of Christian Lundgaard.

With his tyres fading fast, Schumacher struggled mightily in the closing laps and could not prevent Renault F1 Junior Lundgaard passing him for sixth on the final lap.

With Schumacher finishing seventh, he added two points to his margin over Ilott, and they go into next weekend’s final round on the Bahrain outer circuit separated by 14 points.

Shwartzman had got away well from pole, while Yuki Tsunoda emerged from the Turn 1 scramble in second place ahead of front-row starter Marcus Armstrong.

But the unfortunate Tsunoda had picked up a right-rear puncture from minor contact with Armstrong at Turn 1, forcing him immediately to the pits.

The Carlin-run Red Bull and Honda junior pitted again to fit a set of medium option tyres under the safety car, but was too far adrift at the restart to have any hope of points.

Nikita Mazepin had been slow away at the start, with a new clutch fitted to his Hitech Grand Prix car following the feature race, and passed Armstrong’s ART machine for second just before half-distance.

At this point he was 1.6 seconds adrift of Russian compatriot Shwartzman, and chipped away at the gap over the next couple of laps, but he had taken too much out of his tyres in his early charge from sixth on the opening lap.

The Swiss had always intended to go for a gamble of pitting to take on the medium tyre, and did this under the safety car.

Deletraz was up to fourth with two laps remaining, and was promoted to third when Charouz teammate Pedro Piquet suffered the heartbreak of a mechanical failure when within a few miles of his maiden F2 podium.

That promoted Armstrong to fourth from the Virtuosi car of Guanyu Zhou, with Lundgaard sixth, Schumacher seventh and Saturday winner Felipe Drugovich (MP Motorsport) claiming the final point for eighth.

Jack Aitken was another to pit under yellow for medium tyres, and was into the top 10 when he suffered a left-front blowout on the final lap, so Roy Nissany (Trident) and Artem Markelov (HWA Racelab) completed the top 10.

The safety car was caused by Theo Pourchaire pulling off on the outside of Turn 1 after the fire extinguisher went off in his HWA car.