Sergey Sirotkin: The toughest moment of my life 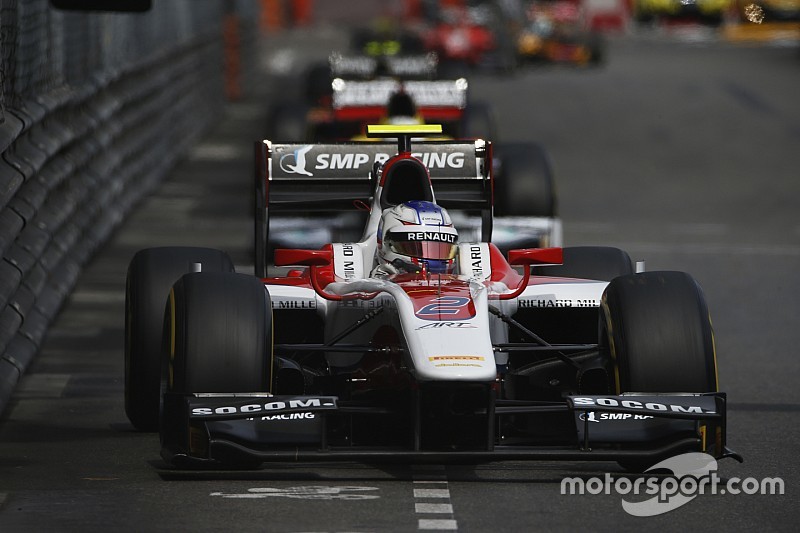 In his second column for Motorsport.com, GP2 ace Sergey Sirotkin reflects on another difficult weekend in Monaco, where the Russian once again had only himself to blame for his lack of results.

This past Monaco weekend didn't go as I expected. Over the three days, I felt we were the fastest out there in the field but, apart from the four points for pole, I have come up empty-handed.

Things started quite well. Every time we were on track, we were more or less the quickest car. Everything looked okay and qualifying went really well – actually, I made a little mistake with the upshift on my quickest flying lap which cost me at least a tenth – but the pace was just incredible and the car felt really, really amazing, and pole was ours.

So of course, we were confident heading into Race 1. The start, unfortunately, wasn't great, as I slipped behind Norman Nato. We know why it was slow, but it's an internal team thing so I can't really go into detail. But we know what the problem was, so it will be okay for the future.

I definitely had much more pace than Nato, which I could clearly see as I ran so close to him. But Monaco is a track where you normally don't expect to overtake, especially when there is no traffic. You just follow the car – but I felt much, much quicker, and I was trying.

Not that I was aggressive – now I'm thinking, I could have been a lot more aggressive. But, funnily enough, I didn't want to take the risk. I figured I was quicker and I'd get the chance later.

I was just following Nato, didn't want to go too close, because there was no point anyway. And we were pulling the gap from the others.

I did cut the chicane once, and I decided to go straight on; no point in trying to make the corner and crashing. I made sure to continue on with a bigger gap than I had to Nato, so that there would be no danger of a penalty.

And after two laps, I was back in DRS zone. That was the kind of pace we had.

I was feeling very confident, again. Everything was really good, everything completely under control, which is not something you feel very often in racing. But that's how it was here and that's how it had been in Barcelona.

For the crash here at Swimming Pool, just as for the Barcelona spin, we checked the data, we checked everything and we still can't see why either happened. Here, on that lap, I hit the kerb slightly more than the lap before, but I was slower on entry - and this kerb at Swimming Pool, I've jumped it hundreds of times, often at a higher speed.

It was a lot like Barcelona, and it's not very nice. If I could see clearly what I'm doing, what is creating the problem, I could say “well okay, just don't do that anymore”. But I don't see anything. I'm driving like I'm normally driving, and then I'm suddenly in the wall.

Immediately after the crash, I could not believe it. It was a very strange feeling - like you're having a nightmare and you want to wake up, but you can't. To be honest, that might have been, no joke, the toughest moment of my life.

I couldn't fall asleep for a long time on Friday, basically didn't. But by Saturday, I got over it – it was kind of easier to get over this one than Barcelona, somehow.

Sticking with the approach

On Saturday, we took the opportunity to change the monocoque – the change was planned for Baku, but we decided to go ahead early. There are no two monocoques that are totally similar, so you need time to adapt – and it's not like I could do much in the race, starting from nowhere.

Unfortunately, the start wasn't great - and there was no reliable way to overtake anyway. First lap, I did a couple of good moves. I think I gained four or five positions, just going around at Turns 4, 5, 6. But that was early on.

Afterwards I was just following the cars in front - I had more pace than them, but I couldn't do anything - and there were a couple of moments, if I were in the mood I had been in Barcelona, I would've just sent it down the inside. But now I was thinking: 'What's going to happen if I crash again?'

Then again, I don't want to race like this - I was always aggressive throughout my career, I always go for opportunities flat out and I will try not to change that. I'm here to win, and if, any time soon, I'm in P2 again, following P1 and feeling that I'm quicker, I will try to overtake.

I could've finished second or third in Barcelona, then attacked more in Race 2, and I could have done the same in Monaco – and maybe I would be at the lead of the championship, with my favourite tracks yet to come.

A big part of the job would have been done. But I want to race how I raced last year - I want to win, and if I get more chances to win, I will go for them. I won't just stay there, tiptoeing around the track.

In what was a very appropriate end to the weekend, the fire extinguisher went off in my car midway through the sprint race and I had to call it a day.

The extinguisher wasn't even faulty. I just had a piece of tyre go into the ring that you need to pull to activate the extinguisher - something a marshal can do if he needs to in case of a crash.

The piece was quite long and it managed to activate the fire extinguisher. And of course, of all places, it had to be on entry of Turn 3, which was a big shock at the time.

I couldn't see where I was going, I made a mistake of breathing in and I couldn't breathe for 10 seconds after that. I wanted to ask the team what to do, but physically could not. So I stopped the car, hoping that it would clear out, but it only got worse and I was done.

I want to thank the team a lot for what they're doing. The support from them, the human factor, it was really good and I'm thankful for that.

And the guys, the mechanics, they were working until 1.30am after the Friday crash, trying to make sure the car was ready, even if all we'd get from it is a start at the back of the pack on a track where you can't pass. Not many teams would probably do that.

But this team, you can see, is the best in every single aspect.

Last but not least, I would like to congratulate Nobu Matsushita, my teammate, for his spectacular win on Saturday in the sprint race.

They say your main competitor is always your teammate, and that's probably true, but I get along with Nobu really well. He's talented, very quick and was well-deserving of his win.