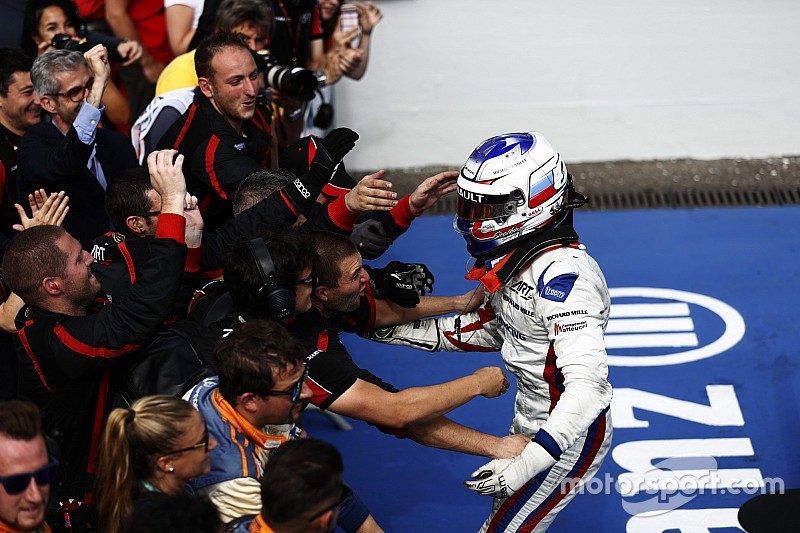 In his latest Motorsport.com column, GP2 racer Sergey Sirotkin reflects on another successful weekend in the Formula 1 feeder series that has propelled him into a joint-points lead heading into the summer break.

After the success of Hungary, myself and ART Grand Prix have produced another strong showing this weekend. Again, we stood on the podium in both races – even if it wasn't exactly smooth sailing – and equalled Pierre Gasly on points.

The championship is absolutely chaotic this year and everything can turn around in the blink of an eye, so, of course, we weren't aiming to catch Gasly in Hockenheim.

And expecting him to run into the troubles he did wouldn't have been correct. But either way, we came to Germany seeking pole position and victories – and we knew we had a very good chance.

Pole lap over the limit

The start to the weekend wasn't exactly ideal. We began practice with settings that the team had left over from 2014, when GP2 last visited Hockenheim. And those settings weren't quite working out.

Perhaps that was due to track temperatures or wind, but we just couldn't get a particularly good result in practice. And it didn't help that I had never previously raced in Hockenheim.

The main thing from practice, however, was that we understood what worked and what didn't, and made changes accordingly. However, my first run in qualifying wasn't the best and, while I wasn't particularly off the pace, the small margins in the field meant that quite a few drivers ended up ahead.

Then, on my second stint, I got baulked by traffic already on the out-lap – and eventually scrapped my first push lap, because I had made a mistake and wasn't going to improve. So I decided to cool the tyres and try on another lap.

The team told me on the radio that almost nobody improved on their second try, and I figured that I was probably not going to be able to get higher up the order. As such, I decided – and I don't normally do this – to go a bit over the limit and hope I can get the lap done.

There weren't a lot of drivers on track at that point, so we got clean air, and we did well at getting temperature into the tyres.

As a result, even if we probably didn't have the fastest car in that session, it was pole position, because we got pretty much everything we could in every corner – and that was just about enough to go a hundredth of a second quicker than Gasly.

When two stops are better than one

In Saturday's race, I got a decent enough start – not too great, to be honest, but it also depends on track conditions. And since those around me had it worse, I comfortably kept the lead.

But the first few laps were tough. Initially, we planned a rather long stint on the soft rubber, but those behind us had different plans. I was trying to find a balance between keeping pace with my opponents and trying to manage tyre wear, and I couldn't keep Raffaele Marciello behind – although, clearly, he was pushing almost to the max at that point.

And then the whole VSC mess happened. Basically, on pitlane entry it's fairly difficult to see the panel that alerts you of VSC activation, as it's a blind corner and the panel itself is quite far away. So I had no idea that I broke the rules. Plus, the antenna on the roof of our truck broke, so the team-to-car radio wasn't working very well.

So, simply put, I did not have any information about the VSC when entering into the pits. Only when I was already on my way towards our mechanics, I saw the next panel – and realised the stop might end up not counting.

We put on the medium compound, and I didn't lose a lot of time – a normal stop, without VSC, would've cost me twice as much, but here I remained in the top 10. The pace of the car was absolutely fantastic then, and I could do good laps to make up the time loss.

Finally, when we realised we got it wrong with the first pitstop, I started to push even more, figuring that I was going to have stop again.

At that point, we had a brief problem. Because of the radio issues, I couldn't fully hear what the team was saying and thought they were telling me that we wouldn't have to stop again after all. Until the situation was clarified, I spent a couple of laps going between attack mode and conservation mode.

I took on the softs for the final stint, and returned to the track in something like fifth place. On these tyres, the speed was very good and we dominated. I had no trouble passing everyone else, taking the lead, building up a gap and leaving some tyre life for the end, in case of a safety car or other unforeseen circumstances.

It was a brilliant result, especially given the mistake in the beginning. At that point, we thought the race was lost and that we'd need to do work hard to even stay within the top eight for a good spot on the Sunday grid.

But, on a track where it's quite easy to pass and the tyre wear is high, two pitstops, this time, ended up quicker than one.

Could've been a double

The second race saw another relatively good start for me as I moved up two places. Honestly, I could've tried for more, but I decided not to risk it because, at this track, there'd be other chances.

I passed another car on lap 1 at Turn 6, and then tried to stay close to the tightly-knit pack ahead, saving tyres. They were battling it out and I knew that, that way, they were going to run out.

Still, at a certain point, I had to start going for overtakes because I was losing time. In that, we were slightly helped out by the VSC restarts, during which I got closer to other cars to attack.

Soon, a crash happened up ahead, with Antonio Giovinazzi exiting the fight, and now I only had Oliver Rowland ahead of me. He defended well, but ultimately wasn't difficult to pass – and I was into second place.

It would've been difficult to get more than that. The battles on the opening lap took a toll on my tyres and I couldn't catch Alex Lynn. I was closing in somewhat, but there wasn't a big enough difference in pace. And I wouldn't expect that anyway, as he had spent the whole race in clean air, while I was following cars for most of the distance.

So, yeah, we couldn't get a rare victory double, but I don't think that's a cause for major disappointment, as we got very important points. Although, if circumstances turned out different, we could've had a real chance.

No change of approach

It is genuinely hard to believe how quickly we made up our deficit in the championship. But that doesn't mean there will be a change of approach, a new focus on defending or anything like that.

The goal is still to score as much as possible every time, to get the most out of every time you're on track.

We'll treat every session as separate, trying to perform as well as possible, without focusing on the title fight. It's still too early for that.