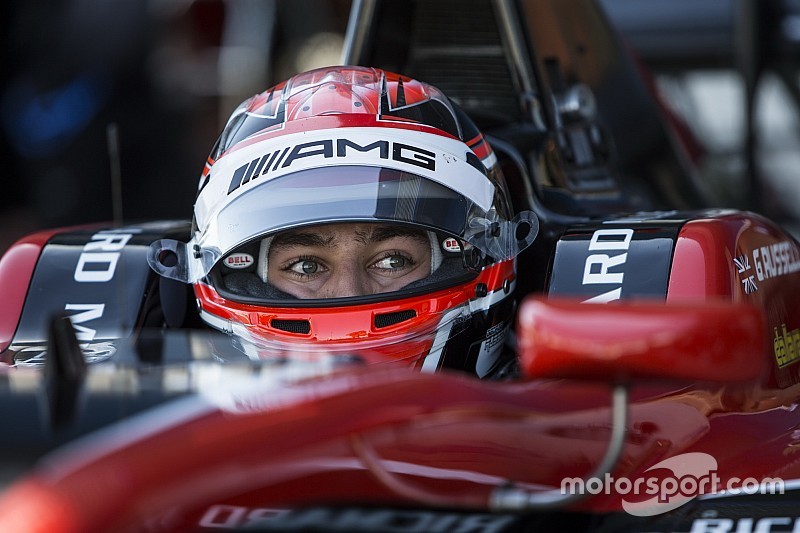 Mercedes Formula 1 junior driver George Russell says he would “love” to be teammates with Lando Norris in Formula 2 next year after winning the 2017 GP3 title.

Norris has previously said that he is likely to switch to F2 or the Super Formula championship for 2018.

With Russell also eying a step up to the second-tier series next year, he would like to directly measure his ability against his fellow Brit.

“I’d love to be team-mates with him, because I think there’s a lot of hype around him and Charles [Leclerc] at the moment,” Russell told Motorsport.com.

“My goal next year will be to try and win the Formula 2 championship, which is where it’s looking like I’ll be racing next season.

“I think Lando is definitely going to be one of the main rivals out there and I’d prefer having him as my teammate in exactly the same equipment to me as [opposed] to him in another team.

“I want to be the best and you’ve got to beat everybody. I [also] think it would make a good little team.

“I’ll probably speak to him and speak his management and see what they think about it – for us both, it would be good.”

While Norris has been tipped for a drive with Prema, Motorsport.com understands Russell’s most likely destination for 2018 will be DAMS.

He sealed the championship with a round to spare and is the first British winner of the category since Alex Lynn won for Carlin in 2014.

The 19-year-old spent the last two seasons racing in Euro F3, where he took three wins and a best championship finish of third place in 2016.

After making the switch to GP3 for this year, Russell agreed that his title success vindicated joining the third-tier category on the F1 support bill.

“Last year was a tough year for me,” he explained. “I felt like I performed extremely well but the only way you can judge that is to my teammates.

“I had two strong teammates [Ben Barnicoat and Nikita Mazepin] and I think I out-qualified them 28 out of 30 times.

“So this was my selling point to Mercedes and then when we had the opportunity to race in Macau [in 2016], I put a lot of work into the event because I knew it’s a driver’s track.

“I knew if I performed there that would show that I’m capable of doing the job and that’s exactly what we did by putting it on pole.

“Certainly this season will... not make up for the previous two, but I think it’s probably what we’ve deserved.”