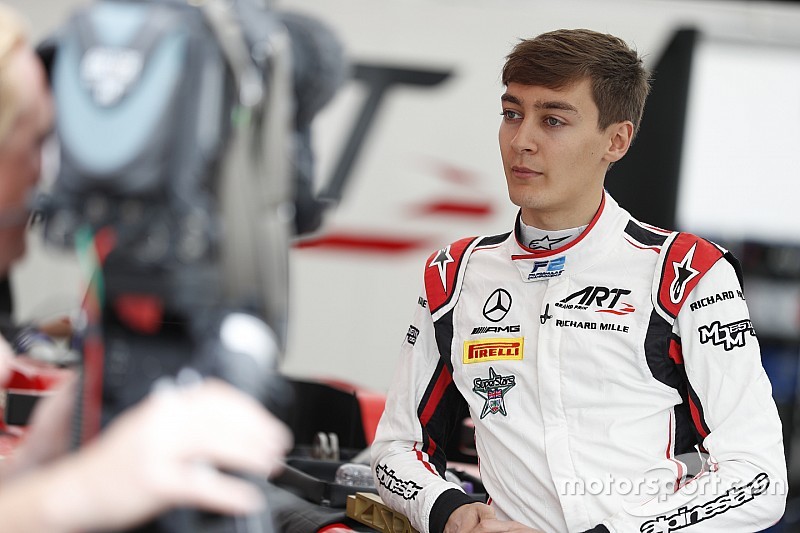 Mercedes Formula 1 junior George Russell has kept his F2 feature race win at Barcelona, after being fined €3,000 for throwing a water bottle out of his car.

Russell jettisoned the bottle on under a virtual safety car after it came loose in his cockpit, having driven with it between his legs for three laps.

“It moved slightly so when I was trying to turn there was nowhere for my arm to go to,” the ART Grand Prix driver explained to Motorsport.com.

“I managed to rip it off and I stored it between my legs for three laps, I planned to keep it there until the pitstop and throw it out at a safe time.

“But when I saw the opportunity of the virtual safety car, I thought it was a good and safe opportunity to get rid of it, but consequently we’ve been given a €3,000 fine and a penalty point on my license.”

The bottle was only included after a late weight check before the race; Russell and his ART team erred on the side of caution by installing it.

“The reason it was there in the first place was I jumped on the scales beforehand [before the race] and I was lower than I expected, so we put the bottle in, so it was a last minute bodge job,” added Russell.

“It’s [the water bottle] mounted on the chassis. As it happened I came in and my weight was fine, we didn’t actually need it.

“It’s not ideal, it was just something extra to think about and I was leading the race at the time.”

Russell, who went from eighth on the grid to fourth in Sunday's sprint race, won the feature race after surviving a late lunge from Nyck de Vries.

The McLaren F1 junior ran Russell – who had to take evasive action – off the road at Turn 1 while he was leading the feature race in Baku, and tried a late move on Russell again after a late VSC at Turn 5.

“It was [a scary moment],” Russell said of de Vries' overtaking effort. “I got a little bit unfortunate with the timing of the virtual safety car as it was on the straight, I believe he had DRS.

“I knew if he went for the move he wouldn’t make the corner so I left the door open and let him go.”

Russell now lies third in the points standings on 62 points, 18 behind leader Lando Norris. Alexander Albon is second on 67.