Coming off a very important win for yesterday’s feature race at the Autodromo Enzo e Dino Ferrari circuit in Imola, Italy former GP2 Asia champ Romain Grosjean just needed to finish better than his title rival, Jules Bianchi. Starting from eighth on the grid the French driver for DAMS would have faced a good fight in today’s sprint race, but instead found himself able to cruise to the end as the 2011 GP2 Asia Series Champion when Bianchi was taken out at the start of the race.

“I am very proud to be part of Dams and help to bring them back to the top. The Asia Series’ level this year was really high because only Christian Vietoris was missing for now. It was a good benchmark for everyone,” said Grosjean.

With his rival gone Grosjean focused on fighting for a podium finish in the sprint race but failed to get past Giedo van der Garde and instead found himself defending fourth from Esteban Gutierrez. In a last lap attack Gutierrez made his move and Grosjean defended by cutting onto the grass. The champ crossed the line fourth, but was later penalized for the shortcut and earned only one point for the fastest lap in today’s race.

Meanwhile at the front of the pack Dani Clos was able to take the lead from the second row while polesitter Fairuz Fauzy was slow off the line. The Malaysian then found himself squeezed into the first turn and hit Bianchi, who then struck Stefano Coletti, retiring all three from the race. 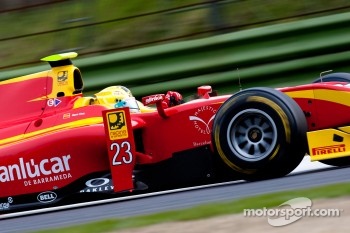 Fabio Leimer slotted into second and never eased his attack on Clos for the entire race. Clos kept control under pressure and was able to keep the door shut with a near perfect run at the front. Leimer had to settle for a very close second while van der Garde came in third.

“I had a pretty good start today,” explained Clos. “And after that, the job was to be constant and to hold back Fabio. Nothing else... It’s really positive for me because I have not done much mileage on this car during the Asia Series. I crashed in Abu Dhabi Race 1. This is really positive for the team and me. We have more mileage and more data and more things to work with.

In the championship Bianchi ended the short Asia season as runner up while van der Garde’s third today put him third in the overall. For the teams’ title, DAMS beat out Lotus ART with the Barwa Addax team taking the third spot.

The GP2 main series will get underway at Istanbul May 6th for a nine race calendar complementing the Formula One schedule. After two events in the Asia series Grosjean and DAMS are without doubt the strongest package for 2011. Grosjean is now focused on winning the GP2 Championship, a feat he has yet to accomplish, “If I win it, I think I would have done the job. I’m here to help Dams become one of the top teams and I think we are on the right path. It’s a personal challenge: we want to show everybody that we are here and we can be champions.”

As for his rivals, Grosjean weighs in, “There will be many. At the moment, I see Lotus ART as one of the strongest teams. I am sure that Barwa will be there along with iSport. There will also definitely be Racing Engineering because Dani now has quite a lot of experience. But there could be others as well because in GP2, pretty much, anything can happen.”