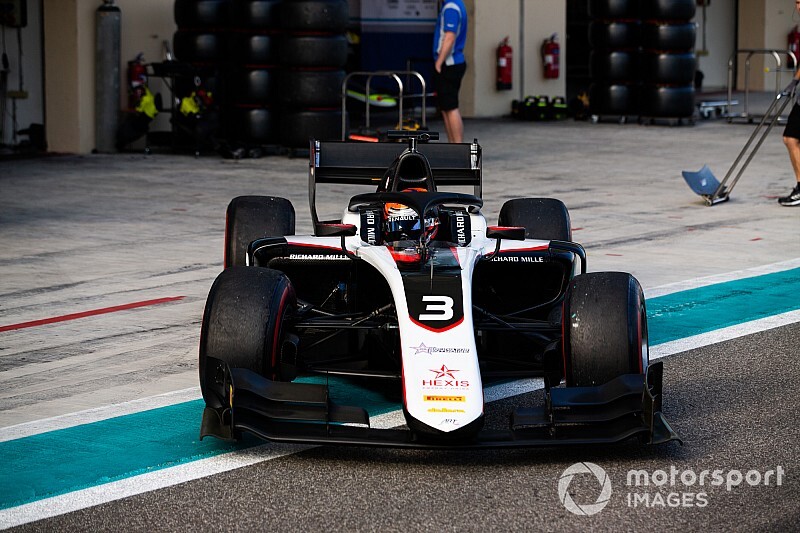 Zhou scored a pole position and set an F2 track record at Silverstone in the process, while taking five podiums on his way to seventh overall in his first season as a Renault junior. He beat many high-profile rookies, including Ferrari’s Prema driver Mick Schumacher.

Chinese driver Zhou will partner the already-confirmed Callum Ilott at Virtuosi. The Brit joins the team as the top Ferrari junior in the standings from 2019.

“To be signing again with UNI-Virtuosi Racing, it’s always been my first priority because last year in 2019 was the first year of working with the team, driving the F2 car for the first time, the Pirelli tyres,” said Zhou.

“To be crowned the rookie champion was something really special for me. It shows a lot of potential in the team, and that we have been working really well together.

“First season as a rookie wasn’t easy, but the team helped me a lot on and off the track and back in the factory.

“We’ve been working hard and putting a lot of effort in. I can’t thank them enough for last season and for this season I’m just super excited to be getting started and to get back on the podium.”

Lundgaard impressed in his maiden season of FIA Formula 3 with ART last year taking sixth in the championship, and he receives a third graduation in a row as he steps up to ART’s F2 line-up for only his third full season of car racing.

Danish driver Lundgaard will also be paired with a Ferrari junior as he joins fellow F3 graduate Marcus Armstrong, who took second in that championship last year. The pair will race for the team which has taken the last two F2 drivers’ championships with George Russell and Nyck de Vries respectively.

Outside of F2, Max Fewtrell is another driver returning to the Renault Sport Academy, but switches from ART to Hitech Grand Prix for another season of FIA F3 in 2020.

The Briton, Formula Renault Eurocup champion in 2018, joined Hitech for the Macau Grand Prix at the end of last year and carries that through to this season.

Brazilian driver Caio Collet is the last of the RSA drivers to be revealed on Tuesday, and he will return for a second season of Eurocup with R-ace GP, the team which steered Oscar Piastri to last year’s drivers' title.

Piastri – a member of the RSA – was announced as a Prema FIA F3 driver last Sunday, while the final RSA member, Hadrien David, was confirmed as an MP Motorsport driver for his second season of car racing, switching from the French F4 title he won to the Eurocup for 2020.

French driver Victor Martins appears to have lost his full RSA backing, as the Formula Renault Eurocup driver was not mentioned in the team’s announcement. Martins has recently tested ART Grand Prix's Eurocup car ahead of its first full season in the category.

F2 driver Jack Aitken graduated from the Renault Sport Academy in 2019 and therefore was not part of the RSA announcement.