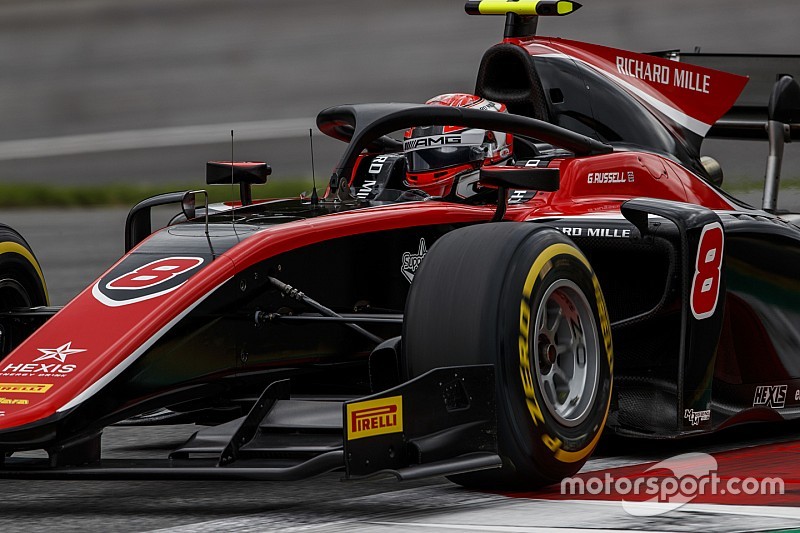 Russell made an early escape and built a gap of over a second to keep McLaren reserve Norris out of DRS range.

But on lap six of 40, the safety car came out for a stopped Ralph Boschung – who kicked his car with frustration – while Nyck de Vries retired after locking up at Turn 3.

That negated Russell’s lead, he and his main rivals making their mandatory stops as Arjun Maini, Sean Gelael and Artem Markelov stayed out.

Russell therefore ran fourth but in a net lead. He passed Gelael and Maini on track, with only Markelov ahead of him, and once the Russian pitted on lap 36, Russell inherited a lead he wouldn’t lose.

Behind him, Norris began to fall back, losing out to Roberto Merhi on lap 30, the former Formula 1 driver moving up to a net second from 12th on the grid.

Norris eventually retook second from Merhi at the outside of Turn 2 on lap 38, and pulled away to limit the championship damage, ending the day two points clear of Russell.

Charouz Racing System driver Antonio Fuoco went from 13th to overtake Merhi on the last lap in an incredible move around the outside at Turn 3/4, stealing the final podium spot.

Alexander Albon, under investigation for an unsafe release, took a provisional fifth ahead of Sergio Sette Camara, who struggled to get going after the safety car on lap six, which cost him his original third position.

While many people around him saw their race fell apart, Tadasuke Makino looked after his tyres and the Russian Time driver will start second on tomorrow’s reversed-grid race thanks to his seventh-place finish.

Alongside him, on pole, will be his teammate Markelov, incredibly overtaking four cars on the last lap to seal eighth after his late stop. Nirei Fukuzumi and Santino Ferrucci rounded out the top 10.

Jack Aitken had battled hard with Maxi Gunther and Louis Deletraz for fourth early on. Gunther finally tore past at the unlikely overtaking spot, Turn 6, on lap 19, and a lap later Aitken pulled off at the exit of Turn 1 after his fire extinguisher went off.

Gunther fell back with tyre wear and took 12th, while Deletraz slowed and pitted to retire with what looked like a technical problem.

F2 resorts to rolling starts due to clutch problems