Quaife-Hobbs to test GP2 in Barcelona and Jerez

After winning the Auto GP title Adrian Quaife-Hobbs has climbed to the top of the wishlists for many motorsport team managers. The Briton has announced that he will take part in both the GP2 Series pre-season tests in Barcelona and Jerez: at the Circuit de Catalunya Adrian will drive for Addax, while in Jerez he will take the wheel of an Arden car. 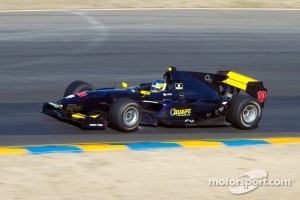 Adrian Quaife-Hobbs in his championship car at Sonoma

Having this kind of interest from two of the top teams in GP2 was undoubtedly good news for the talent from Kent, as he was keen to explain: “My plan for 2013 was to make a step up to GP2, and so I was pretty amazed when I realized the amount of interest that my Auto GP title win had generated in the GP2 paddock. I really got a lot of contacts and to me that meant a lot: it’s good to have different options when you must choose how your career will progress”.

After the two test sessions, Adrian will still be starring in Auto GP, as he has been selected to be one for the development drivers for the 2013 car. The new spec car is expected to be quicker thanks to a major increase in the downforce figures.

Quaife-Hobbs believes that’s exactly what the car needed: “I really loved driving the Auto GP car this year, and I think it really taught me a lot in terms of power and tyre wear management. Now with the new aero package it should get closer to GP2 also from a downforce point of view, allowing the drivers to push more in the corners, particularly in the entry phase. It was already very close, but the 2013 car should prove an even better school for drivers who have F1 as their ultimate aim."

Quaife-Hobbs to race McLaren in BES

Sirotkin switches to GP2 with Rapax