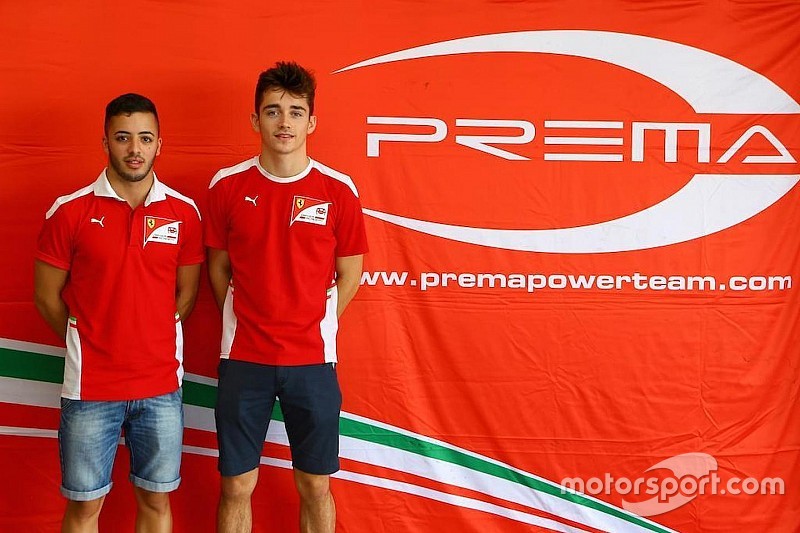 Ferrari junior drivers Charles Leclerc and Antonio Fuoco will both graduate to the GP2 Series for the 2017 season as teammates at champion team Prema Racing.

Motorsport.com revealed last month that Leclerc and Fuoco were both set to step up from racing in GP3, where they competed for ART Grand Prix and Trident respectively this season, with the Italian squad.

Leclerc won the GP3 title on Saturday in his maiden year in the championship, beating teammate Alexander Albon after both retired from the opening race of the weekend.

"I am delighted to line-up for the 2017 GP2 Series with Prema and with the Ferrari Driver Academy," Leclerc said.

"I can’t wait to start preparations for this new and exciting challenge. After having completed my GP3 experience in the best possible way, I will continue to give my 100 percent to keep bringing home positive results.

"I am sure that the support of the reigning champion team, which also finished 1-2 in the 2016 driver standings, will prove crucial."

Meanwhile, Fuoco makes the move up to GP2 after spending two years in GP3, finishing sixth overall in first season and third behind Leclerc and Albon in his sophomore year.

"Entering the GP2 Series in 2017 will be particularly exciting, and doing it with an Italian team which is also the reigning champion will provide some additional motivations for me to do well," Fuoco said.

"I already raced with Prema in the past and I am aware of the high performance level of their cars, as confirmed by the outstanding results they got this season.

"I think that combining the potential of both the team and the Ferrari Driver Academy, we will definitely get some great satisfactions and continue in our personal and professional growth."

Prema team principal Rene Rosin was thrilled to welcome both the Ferrari Driver Academy drivers in its line-up in a bid to retain the title in 2017.

“We are happy and proud for the trust that the Ferrari Driver Academy has given to our team," he said.

"Being able to collaborate with two extremely talented youngsters like Charles and Antonio is highly motivating for the team, and we will provide them with our best support, aiming for more outstanding achievements.

"We know Antonio well because he already raced for us in the past when he cruised to the 2013 Formula Renault Alps title.

"But we also know Charles: we really appreciated him as a rival in Formula 3 and we saw him perform impressively in his rookie GP3 Series season.

"So after completing an extraordinary 2016, Prema is set for a new challenge involving two brilliant racing prospects.

"The GP2 Series is renowned for being a tough fit for rookies, but we are convinced that Antonio and Charles have all what it takes to emerge in the short term."

Leclerc and Fuoco will start their 2017 GP2 preparations by taking part in this week's post-season test in Abu Dhabi.