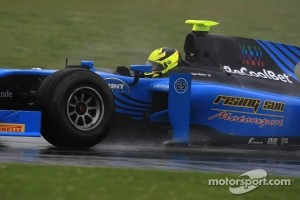 Hot on the heels of its exploits at Silverstone, where it secured points in each race and came close in the fight for the podium, Ocean Racing Technology has the same objectives for the weekend of July 21 and 22, when it will compete in the GP2 Series races in Hockenheim, Germany.

Since the first time he put a mile under his belt in the GP2 Series this year, Nigel Melker has reached a new level of quality in his performance. The Dutch driver had already revealed a glimpse of his immense potential, and his most recent results have strengthened his confidence and motivation. "I think that we are able to repeat the same type of race and results as at Silverstone," declared Nigel Melker, "My goal is always to do better, but I don't want to raise the bar too high. Getting into the points is the main objective, doing better would be a bonus."

The past two weeks, Victor Guerin has been preparing physically in Italy, where he lives, in order to better face the demands of the GP2 Series. "It was intense and very important training. Nothing can be left to chance at this level. I don't know the Hockenheim circuit, but I think that it will be easier to learn than the previous one and the weather conditions appear to be better. My goal is to find the same pace as in Monaco, when I was among the fastest in the race," declared the Brazilian driver, who continues to sustain the competition, despite being totally new to the GP2 Series.

The Hockenheim races will be broadcast live on Sky Sports, Saturday at 3:35pm and Sunday at 10:30am.

Back to the precious Ring