Pirelli's GP2 and GP3 drivers learn about tyres in Spain

GP2 and GP3 review: Barcelona was a good test of tyre management on the Circuit de Catalunya

Barcelona, May 14, 2013 – During this year’s first weekend of GP2 and GP3 competing together alongside Formula One, Pirelli’s junior drivers from both categories learned a lot about tyre management. With GP3 followed by GP2 now acknowledged as the standard route to Formula One, the lessons taken on board in the feeder series will have a vital effect on the careers of the champions of tomorrow. 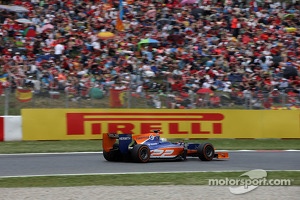 Pirelli’s racing manager Mario Isola commented: “At the first round of this year’s GP3 Series, the drivers had to understand our new tyres very quickly. However, they all did a fantastic job and we could see already in the second race many drivers putting into practice everything they had learned during the first race. With Barcelona being probably the most demanding track of the year for the tyres, the drivers in both categories were faced with a very tough task but showed commendable maturity and racecraft that will stand them in good stead for Formula One. In GP2, we once again saw a wide variety of race strategies, with the fastest drivers who were able to use their tyres most effectively rewarded with the top points finishes. With both categories racing together for the first time it was a busy weekend for Pirelli, but we believe that we were able to give drivers from each series the ability to show the best of their skills and underline the correlation between the two feeder championships.”

For GP2, the P Zero Orange hard and P Zero Yellow soft tyres were nominated (the same nominations made for the opening two rounds in Malaysia and Bahrain). For GP3, just one compound is selected per race weekend: in Spain it was the hard compound. All the GP3 compounds carry the same yellow markings however.

With warm temperatures, an abrasive surface and a challenging track layout that features several long corners, Barcelona is extremely demanding on tyres as it puts one of the highest energy loadings of the year through them. Consequently, looking after the tyres by knowing when to push and when not to push was an essential skill in both categories.

In GP2, where there is a compulsory pit stop in the feature race, Sauber reserve driver Robin Frijns took victory on Saturday. Like all the frontrunners, he qualified on the soft tyre, lining up eighth on the grid. He made a good start and chose to make his stop for the hard tyres as soon as the pit stop window opened on lap six. This decision proved crucial to his race victory, as he was able to undercut his key rivals while managing his tyres correctly to the finish.

The Dutchman said: “I learned quite a lot from the last race in Bahrain. Everybody knows that Barcelona is quite a hard track on the tyres as well. But I managed them quite well and left a pretty decent gap to Jolyon Palmer the whole race and then Felipe Nasr came back and he was quite quick. I still had some tyres left so I could pull away a bit. That’s how I won.”

In the sprint race on Sunday, with no pit stops, Stefano Coletti won on the hard tyres and increased his championship lead, having got past polesitter Johnny Cecotto at the first corner. All the drivers used the hard tyre with the exception of Tom Dillman, who set the fastest lap of the race on the P Zero Yellow soft.

In GP3, a brand new 400-horsepower car means that the Pirelli P Zero range has been heavily revised for this season. With no pit stops allowed, the hard tyres were chosen for the heavy demands of Barcelona. 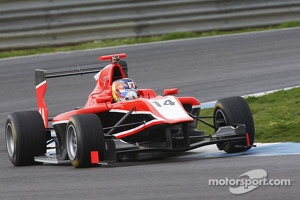 Cypriot driver Tio Ellinas became the first GP3 driver to win consecutive races in different seasons thanks to victory in the feature race, following on from his win at the final round in Monza last year. He also claimed pole and fastest lap, judging his pace perfectly and demonstrating the performance of the new P Zero compound and GP3 car, which is up to five seconds per lap quicker than the previous package.

Ellinas said: “We pushed from the beginning. We had a good fight; I think I was very clean with my moves. Towards the end we managed the win. Tyres were key today and now we know how to work them for the next race.”

As is the case for GP2, the grid for the sprint race in GP3 consisted of the top eight feature race finishers reversed. The 50th race in the history of GP3 resulted in a one-two for the new Koiranen GP team from Finland, with Aaro Vainio winning ahead of Kevin Korjus (who started from reverse pole). Vainio made a superb start to lead from fourth on the grid, managing his pace perfectly all the way to the finish. Once again, knowing exactly when and how hard to push in order to contain degradation was the key to success.

This year’s GP2 season takes in 11 rounds and 22 races, with GP3 taking in eight rounds and 16 races. The next round of the GP2 series takes place in Monaco from May 23-26, while the next round of GP3 is a stand-alone event at Valencia on June 16.

First points of 2013 for Barwa Addax Team in Spain