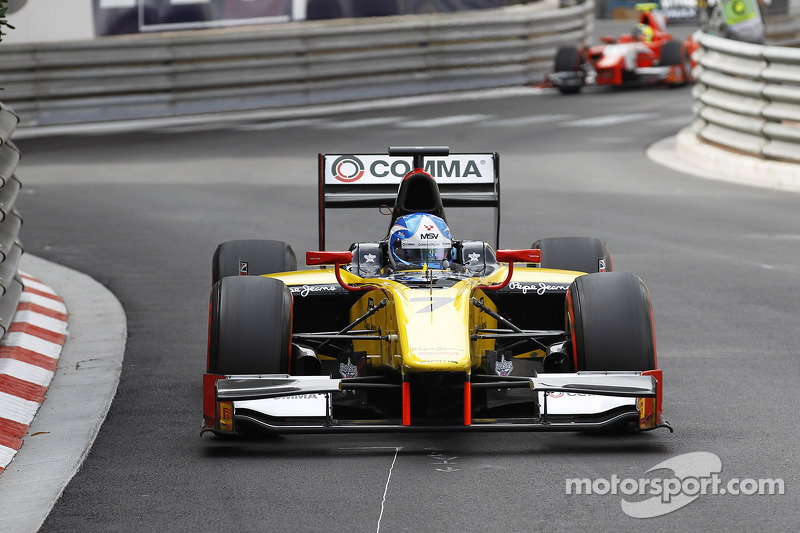 Series leader Jolyon Palmer is again a happy man today: he recovered from a slow start from pole position, and then survived three safety car periods and a red flag to take a second win this season ahead of Mitch Evans and Felipe Nasr.

When the lights went out, Evans had a better start from P2 than Palmer and took the lead of the race into Turn 1. Behind him, the poleman was busy keeping his teammate Stéphane Richelmi at bay. At the front, the Kiwi was on a mission on super soft Pirelli tyres and quickly tried to build a gap from Palmer, but his efforts were reduced to nothing after Facu Regalia stopped his car alongside the harbour and the safety car was deployed. At the re-start, Evans kept the lead and started to push hard again. However, it was not enough: Palmer’s blazing pace picked up again and the Briton closed in on Evans to eventually overtake him at Ste Devote.

Richelmi was up next as Evans seemed to be struggling for pace and a small train of cars formed behind the two with Johnny Cecotto also hot on the Monegasque’s trail. Twelve laps into the race and a bit of mayhem occured at Mirabeau after both Arden cars collided with André Negrao sent into a spin stopping on track. Artem Markelov could not avoid the Brazilian’s car and also collided with Negrao blocking the track effectively as the race leaders arrived on site. The race was red flagged. The cars re-joined the grid and after they were all put back into the correct order, the race was re-started under the safety car.

Once the track cleared, Palmer put his head down and set a string of fastest laps to build a gap of nine seconds to Evans who still ran on a slower pace than the rivals behind him who were all on soft tyres. But once again the safety car was deployed: the fight between Julian Leal and Raffaele Marciello for eighth place ended in tears for the Colombian driver after he tried to pass the Italian before the new chicane and lost control of his car crashing into the wall. That’s when all the leaders decided to come in for their mandatory pitstop leaving Stoffel Vandoorne into the lead. Palmer re-joined the track behind the Belgian whilst Evans re-joined in fourth place behind Simon Trummer. Both Vandoorne and Trummer still had to change tyres.

With fifteen laps to go, the action resumed. Stefano Coletti wasted no time to put pressure on Sergio Canamasas and passed him at La Rascasse for sixth place. A lap later, the Monegasque driver was all over Felipe Nasr (who had pitted early on lap 7) and also overtook him at the same spot. He then quickly discarded of Evans before setting his sights on Palmer, but he had one more car in front of him before he could challenge the Briton for the win. Unfortunately for the local hero, as he tried to pass Trummer at La Rascasse, both cars collided ending their race.

Vandoorne pitted and Palmer was back in control ahead of Evans and Nasr. In the dying minutes, the Brazilian closed in on the Kiwi but couldn’t pass him. At the chequered flag, it was all smiles and hugs for Palmer who pocketed a well-deserved win in the streets of Monte Carlo. Close behind him, Evans and Nasr (the latter from P18 on the grid) also enjoyed some champagne. Behind the trio, Cecotto had to settle for fourth ahead of teammate Canamasas, Arthur Pic (who had started from P14), Rio Haryanto, Richelmi (who will start from pole position on tomorrow’s reverse grid), Adrian Quaife-Hobbs and Tio Ellinas.

Palmer on pole position at Monaco