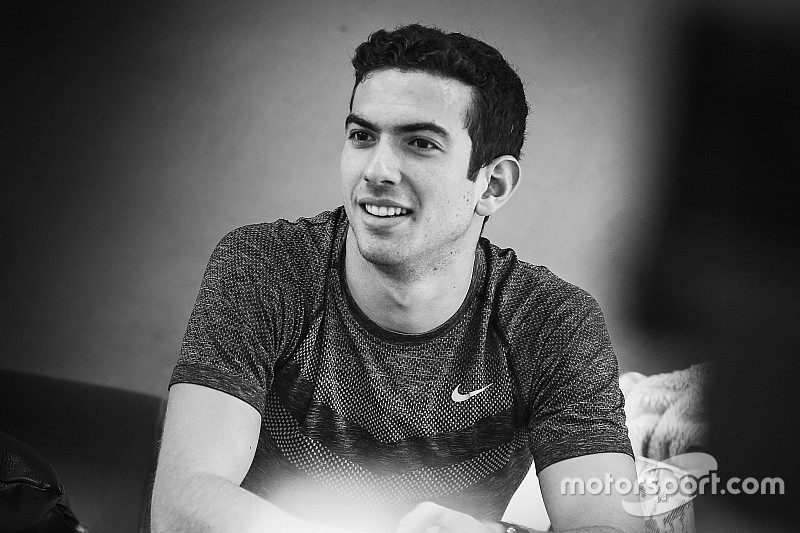 Canadian Nicholas Latifi is about to enter his fifth season in car racing as a member of the powerful DAMS squad in the GP2 Series.

During the four past years, Latifi competed in the Italian, British and European Formula 3 series, the British Porsche Carrera Cup and the New Zealand-based Toyota Racing series, as well as the Formula Renault 3.5 and GP2 series.

Motorsport.com talked with Latifi about his experience driving these various racecars, his nomination as a test driver for the Renault Formula 1 team, and his goals for the 2016 season.

Born June 29, 1995 in Montreal, Latifi moved to Toronto with the close members of his family when he was just six months old. He started racing karts at the age of 13, much later than most of his competitors.

“I did most of my karting races in North America -but no, I’ve never raced cars in Canada. I've done a few test days at Shannonville (Ontario), and I have done a track day at Mont-Tremblant (Quebec), but that’s it.”

And why did you begin your racing career in Europe?

“My first year racing cars was in 2012, competing in the Italian Formula 3 Championship. The reason I decided to do that was because my goal was to reach F1 one day. Obviously, to do that, you have to go and race in Europe.

"I decided to go straight to Europe because I didn’t want to lose another year racing in a category like Formula 1600. So we chose the Italian F3 series.”

Interestingly, you also raced tin tops in the UK, competing in the British Porsche Carrera Cup. Why was that?

“I raced in the Porsche series because I started relatively late in the sport. I started racing karts at the age of 13 while most others start when they’re eight or nine, or even sooner than that. I was always racing against rivals who had more motorsport experience than me.

"Last year, I raced in the Formula Renault 3.5 series where testing is prohibited. It was important for me to get as much track time as possible. So we decided to race in the UK Porsche Cup.

"It’s a totally different car than the ones I was used to. It’s heavier, and has far less downforce. It forced you to adapt quickly.”

“The main reason I did those few races in GP2 was because we knew the goal was to try to compete full-time in GP2 in 2016. It was just really to get as much experience as possible in that category.

"The history of the series shows that the guys with experience do well and end up winning."

This season, you are part of the powerful DAMS team in the GP2 series.

“Yes, and it’s very positive. I’m really pleased to race for DAMS, one of the best teams in GP2; they’ve won several championships in that series.

"Doing the races I did last year in GP2 with MP Motorsport, still a very good team, was a good thing, but they don’t have the experience that DAMS has.

"One of the main things that made it difficult for me last year was to join the series at mid-season. I had no pre-season testing. It was very difficult just to jump into a GP2 car like that, with very little practice and very little knowledge of the series.”

At the beginning of the year, it was announced that you joined Renault Sport F1 Team as a test driver with a long-term development programme. How did that come about?

“There is obviously a link between DAMS and Renault. But my role with Renault F1 did not come about because the link between them. DAMS is specifically related to the Formula E series in regards to Renault. GP2 is something completely separate.

"I’ve have been in contact with Renault for a little while. I raced in a Renault-backed series last year as well. One of the main things that helped justify my role was the positive test I had at Abu Dhabi with DAMS at the end of the year.”

Now’s the chance for you finally to run a full season in good conditions, driving for a top team in GP2.

“Yes. If you look at my racing career so far, the overall results in the championships are far from what I would have liked. There were always some good points, but the consistency was not there.

"I don’t have as much experience as my competitors, but it’s also a lot of other issues that went on behind the scenes. People normally just look at the results on paper, but they don’t know why you’re getting those results.

"There were always flashes of potential, and I think that was the main thing that helped me achieve a test with DAMS, and then doing the fastest time out of the three days of testing in Abu Dhabi. It showed my potential of turning fast laps.

"I know that the races will be more challenging. But a team like DAMS is capable of developing their drivers, pushing drivers to produce their best. That will be valuable for me.”

What’s next for you with Renault F1?

“I already spent some time in their driving simulator. Later in the year I’ll test the car to get my Super Licence. But honestly, nothing has been confirmed at this point”.