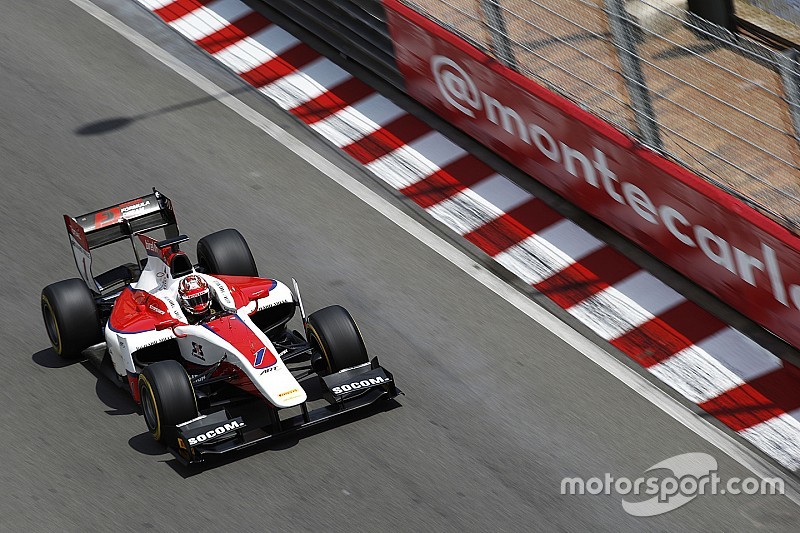 Honda protege Nobuharu Matsushita converted a reverse-grid pole position into his second GP2 win - and ART's first of 2016 - in Monaco.

The Japanese driver, whose maiden win had come from pole in the Hungaroring sprint last year, again led from start to finish for a comfortable victory.

Matsushita's getaway off the line was a bit delayed, allowing Marvin Kirchhofer to draw alongside him into Ste Devote - but the Japanese driver held the inside line to exit the corner in first place.

And in virtually no time he was well up the road, the gap between Matsushita and Kirchhofer growing to three seconds during the opening laps.

With the race settling into a rhythm out front, there was a brief yellow flag disruption as Jordan King forced Philo Paz Armand into the wall at Hotel Hairpin.

Armand's stricken car was removed without the need for VSC, but one was called in shortly thereafter to recover the Dallara GP2/11 of the field's other Indonesian - Sean Gelael, who crashed at Ste Devote.

Kirchhofer gained a second back on Matsushita as the VSC was lifted, but the Honda protege picked up where he left off, taking the gap to six seconds by the halfway point.

It would grow further and further from there, Kirchhofer instead having to focus on keeping third-placed Raffaele Marciello at bay.

Having put in the fastest lap of the race for the two bonus points on lap 28, Matsushita took the chequered flag first two laps later, 13.6s in the clear.

It was third place for Marciello, his first podium with Russian Time, with former RT driver Mitch Evans in fourth.

Alex Lynn held on to fifth despite struggling for pace for much of the race, with Norman Nato just four tenths off - the Frenchman taking the championship lead.

Joining Gelael and Armand among the retirements were Matsushita's teammate Sergey Sirotkin, whose car crawled to a halt one-third into the race, and Nicholas Latifi, who called it a day in the pits.

Markelov and Russian Time certain Monaco win within the rules

Sergey Sirotkin: The toughest moment of my life