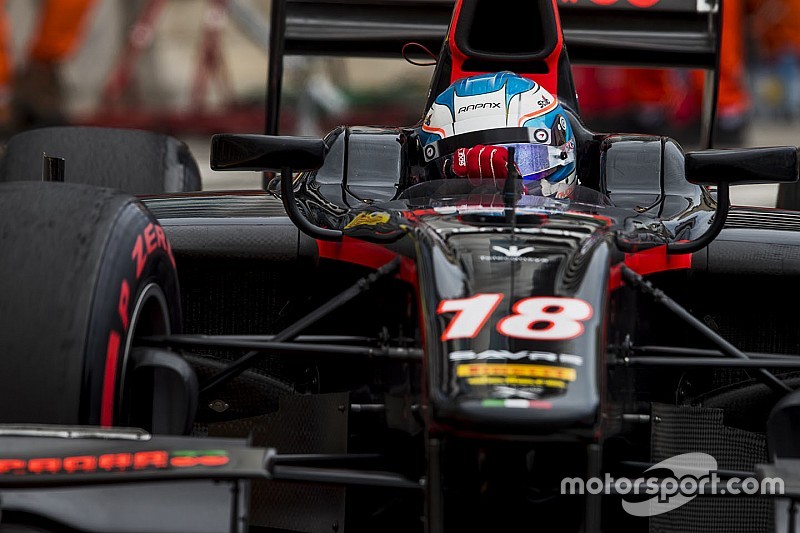 McLaren junior Nyck de Vries took his first victory in Formula 2 in the Monaco sprint race, making the most of a front row start.

Rookie de Vries, who had finished seventh on Friday and thus lined up alongside teammate Johnny Cecotto for the sprint, was into the lead by Ste Devote and did not relinquish it for the rest of the 30-lap event.

His triumph is the Rapax team's first with the Dallara GP2/11 car since 2015, when Sergey Sirotkin won from pole at Silverstone.

Cecotto, who had recorded his first GP2 win in Monaco back in 2012, was slower than his teammate off the line, allowing de Vries to grab the lead round the outside.

The McLaren junior was 1.5s in the clear after one lap, and while Cecotto managed to keep in touch early on in the race, he eventually began to drop back from de Vries.

The gap between the pair was up to five seconds by halfway point and, by lap 25, Cecotto was 10 seconds adrift, with a train forming up behind him.

Despite that, the Venezuelan held on to second, finishing 9.8s off de Vries.

Ghiotto's teammate Artem Markelov managed to pass Alex Albon down the inside of Rascasse to claim fifth, with the Anglo-Thai settling for sixth, one place ahead of fellow ART driver Nobuharu Matsushita.

MP's Jordan King made up the points-scoring top eight after picking off Oliver Rowland, who was then forced to crawl home after being hit in the back by Trident's Sergio Canamasas.

Qualifying pace-setter Charles Leclerc, who had retired with a suspension issue on Friday after leading much of the race, struggled to make progress from 17th.

He'd managed a couple of overtakes but collided with Arden's Norman Nato after a late dive into Rascasse, leaving Nato to park up in the Antony Noghes run-off with damage.

Leclerc himself picked up a time penalty as a result and pulled over in the pitlane on lap 21 - but the Monegasque will keep the F2 points lead heading into Baku.

Joining Leclerc and Nato among retirements was Campos driver Ralph Boschung, who suffered a failure and pulled over at Ste Devote.