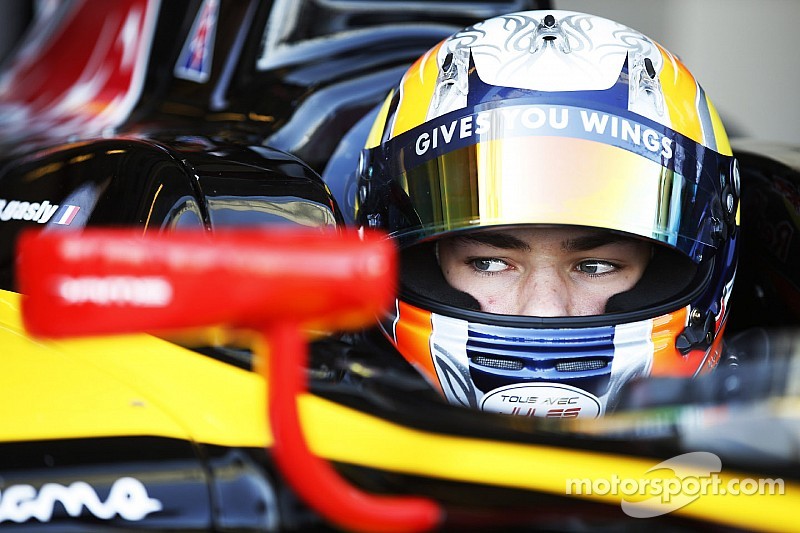 2014 has been DAMS most successful season ever, in particular in GP2 in which the Sarthe-based team reconquered the drivers' (with Jolyon Palmer) and teams' titles. Just as 2015 is about to start DAMS would like to wish everybody a Happy New Year and also that it will retain its titles.

To achieve this it is betting on two rookies, but not just any rookies: Frenchman Pierre Gasly, runner-up in the 2014 Formula Renault 3.5 Championship, and English driver, Alex Lynn, the reigning GP3 champion. These two young chargers full of talent and ambition trained in the Red Bull Junior Team school: they have got everything it takes to keep the name DAMS at the summit of GP2.

Pierre Gasly, born on 7th February 1996 in Rouen, was steeped in motor sport right from an early age: his grandfather and grandmother ruled the roost in kart racing in the early 60s, a feat emulated by his father later on. So obviously when Pierre was old enough to race he too began in karts. He was spotted by the FFSA, incorporated into the 10/15 kart programme and then moved up to single-seaters almost immediately.

He was the youngest driver in the F4 championship in 2011 in which he finished third. The following year the exceptionally-gifted Frenchman confirmed his talent in Formula Renault 2.0 and won the Eurocup title in 2013. He became part of the Red Bull programme and "Gaz-Gaz" as he was nicknamed by his mates moved up to Formula Renault 3.5 in 2014. With eight top-3 finishes he was one of Carlos Sainz and DAMS' toughest rivals and filled the runner-up spot.

Englishman Alex Lynn (born on 17th September 1993 in Essex) continues DAMS's tradition of fruitful collaborations with English drivers. Alex is an unconditional admirer of Michael Schumacher and an Arsenal Football Club fan. He cut his teeth in karts before tackling Formula Renault UK, dominating the 2011 Championship with a record 12 wins from 20 race starts.

Alex moved up to British F3 the following year and finished fourth before progressing to the prestigious FIA European F3 Championship in 2013 where he claimed third in the standings as the highest placed rookie. Alex ended the season by dominating the Macau F3 Grand Prix, the most important race on the junior calendar. In 2014 as a Red Bull Junior, Alex wrapped up the GP3 title with a record points margin and ended the season with his first F1 test in Abu Dhabi.

Jean-Paul Driot: "After the brilliant season we had in 2014 it'll be difficult to do better! Obviously our aim is to keep our titles and I'm delighted to welcome Pierre Gasly and Alex Lynn to the team. It's the youngest driver line-up we've ever had in GP2, but we've got two exceptionally talented guys who have a great future ahead of them. Although the overall level in the championship will again be very high, I'm confident that with these drivers DAMS will prove worthy of its rank."

Pierre Gasly: "I'm very happy to be joining DAMS which, for me, is a benchmark. It's the team I wanted to work with. The first tests we did together in Abu Dhabi really boosted my confidence. I felt at home in the team and I hit it off with all the guys straight away so I was on the pace from day one. GP2 is a very competitive championship and I know I'm going to have to do a lot of hard work. Obviously my aim is the drivers' title. I'm in the best team and I'll have the resources to achieve this objective. I'll also have a very solid team-mate in Alex who I know well. We get on like a house on fire and that'll be a plus for the team. I can't wait for the season to begin!"

Alex Lynn: "I am delighted to be racing with DAMS in 2015. Their record in the last few years speaks for itself and there's nowhere else I wanted to be in GP2 - it's a fantastic opportunity for me and I'd like to thank them for giving me this break. My aim is to fight for the Championship. It's a long time since anybody won GP2 in their first year, but if we can get off to a solid start there's no reason why we shouldn't be able to fight for wins and podiums straight away. I also know Pierre very well, we're good friends and it's not often that team-mates see eye to eye so I'm looking forward to having a good year with him - it will also make things a lot smoother and more productive for the team with us working together in a positive way. Bring on Bahrain !"