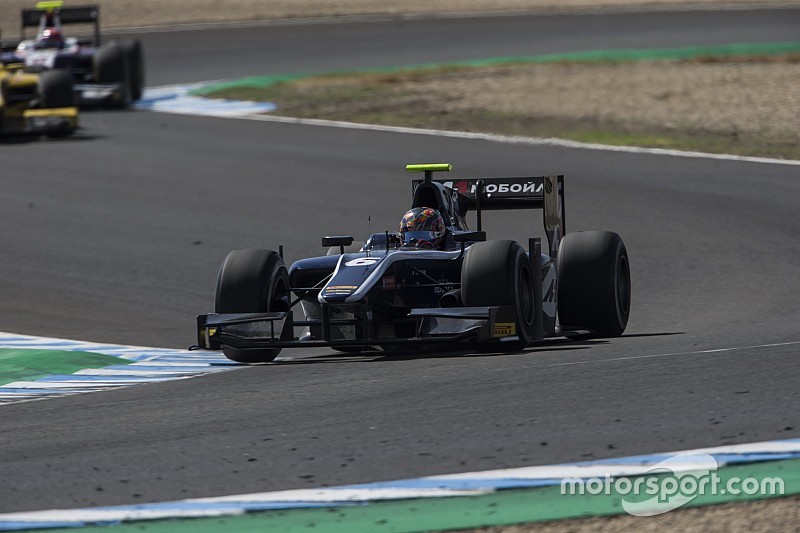 Newly crowned F2 champion Charles Leclerc finished seventh after charging from well down the field on an alternative tyre strategy but fading on the final lap.

Japanese Formula 3 and Formula V8 3.5 race winner Alex Palou, making his series debut for Campos Racing, led much of the race from pole, but also dropped back significantly in the closing stages.

At the start, Palou lit up his rear tyres as he held the lead off the line ahead of Luca Ghiotto and Jordan King, who came together going into Turn 2, an incident which dropped the former to the rear of the field.

Palou scorched off into an early lead – easily pulling away from King, who then retired on lap four of 28 when his engine let go spectacularly as he ran through the sweeping left of Turn 8.

That left Latifi in second after the DAMS driver had got ahead of Markelov during the early running and the Prema Racing pair of Antonio Fuoco and Leclerc.

Fuoco and Leclerc swapped places regularly during the early running, before they fell back behind Rowland, who had started just ahead of them, when they began to struggle for grip.

While Palou maintained the lead, the Prema pair pitted for soft tyres on laps 13 and 14 – with Fuoco coming in first.

They set about charging back through the pack – with Leclerc getting back ahead of his teammate – as up front Palou also began to struggle with his tyres.

Latifi tracked Palou for several laps, which allowed Markelov and Rowland to close in and make it a four-way fight for the win.

But at the start of lap 23, Markelov seized second from Latifi with a decisive pass into Turn 1 and then dispatched Palou to take the race lead on the run down the back straight a few moments later.

Palou defended hard, but had to concede the place and fell behind Latifi and Rowland at the same spot one lap later.

Markelov romped clear to his fourth win of 2017 thereafter, pulling out a 11.8s lead over Latifi by the end.

Rowland put his teammate under severe pressure in the closing stages but could not find a way by.

Leclerc shot up the order following his stop and moved into fourth place ahead of Palou at Turn 2 on the start of the final lap.

But the Ferrari Formula 1 junior driver suddenly dropped down the field on the final tour and came home behind Ghiotto – who recovered from his lap one off to finish fourth – Fuoco and Racing Engineering’s Nyck de Vries.

Palou also dropped further down the order in the closing stages and ended up eighth.

Alexander Albon and Norman Nato rounded out the top 10.