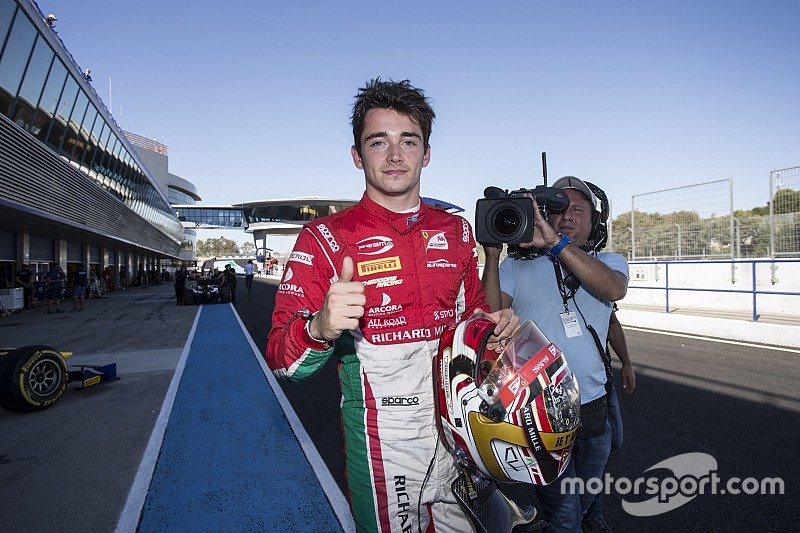 Ferrari Formula 1 junior driver Charles Leclerc sealed the 2017 Formula 2 title with victory over Oliver Rowland in the Jerez feature race that built to a thrilling conclusion.

Antonio Fuoco completed the podium in the second Prema-run car after leaping up the order following a late-race safety car.

At the start, Leclerc led away from pole as he made a better start than Luca Ghiotto and Sergio Sette Camara behind him.

The 19-year-old then put in a string of blistering times over the opening laps – at times pulling out 0.7s per lap on Ghiotto behind.

Rowland, who started fourth, made it up to third on the opening lap.

Despite losing out to Alexander Albon in the first few corners, he reclaimed fourth at Turn 3 and then muscled his way by Sette Camara at the exit of the downhill Turn 6 hairpin.

By lap 10 of the 39-lap event, Leclerc was 6.9s clear of Ghiotto, who lost further ground over the next few laps and came under pressure from Rowland.

The DAMS driver seized second on lap 11, attacking with DRS down the pit straight and moving ahead into Turn 1.

Leclerc had eased to a 11.7s lead by the time he and Rowland pitted on lap 12 to switch to the medium tyres.

The Prema Racing driver then methodically caught and passed the drivers who had started on the harder rubber – including Fuoco and Nicholas Latifi, who took over the lead during the middle phase of the race.

Rowland did likewise, but had to catch and pass Albon and Sette Camara all over again as they had undercut him while he battled past Ghiotto.

When Leclerc eased by Latifi to retake the lead at the final corner on lap 21, it looked as if he had his sixth win of the season easily within his grasp, despite Rowland putting in a series of fast times.

But when Santino Ferrucci and Nobuharu Matsushita clashed at Turn 1 on lap 32, putting the former up on two wheels and out of the race, the safety car was deployed, erasing Leclerc’s advantage.

After a three-lap interruption, Leclerc maintained his lead at the restart – with Rowland having to pass the lapped Sean Gelael.

But Leclerc was visibly struggling for grip and the run to the flag became a three-lap shootout – with added confusion as the lapped Gelael and Louis Deletraz had more pace than the leaders.

With Latifi and Fuoco – now within touching distance of making their alternative tyre strategies work – closing in too, the final stages were nailbiting.

But Leclerc, sliding all over the Spanish track, held on to win by just 0.2s.

He now has an insurmountable 68 point lead over Rowland in the standings with three races remaining.

Fuoco, who got ahead of Latifi at the chaotic restart, ended up just 0.9s behind his teammate despite starting in 15th.

Latifi was therefore fourth, ahead of Artem Markelov, Jordan King and Ghiotto, with Alex Palou eighth and on reverse grid pole on his debut F2 weekend.

Sette Camara and Albon faded to 10th and 12th in the gripping final stages, with Matsushita last after having his front nose replaced.