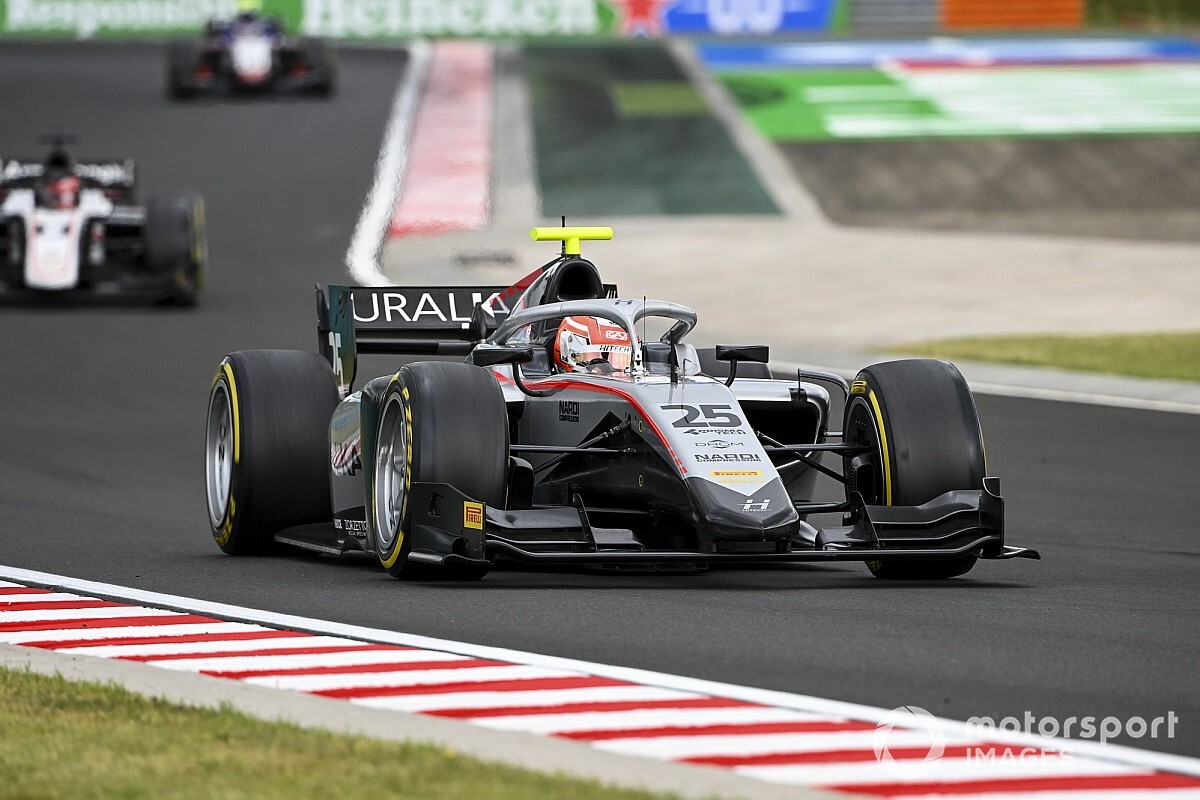 Ghiotto and the new-to-F2 Hitech GP squad elected to stay firm and keep the Italian out on a single set of medium-compound Pirelli tyres in the face of a mass mid-race gamble on soft rubber taken by the other frontrunners.

Virtuosi Racing-run Ferrari junior Ilott had immediately built a 4-second gap to Ghiotto from the start, but this had eroded to 1.9s by the time the Briton followed the lead of third-placed Mick Schumacher, who had been the first to go from mediums to softs on the previous lap.

By the end of his first lap on the softs, with 10 remaining, Ilott was 40.5s adrift of Ghiotto, but began carving an average of 4s per lap out of the leader.

With one lap remaining, Ilott was 4.9s adrift and Ghiotto looked safe, but he then locked up at Turn 1 and ran wide, and lost half of that advantage in a moment.

Ilott was right onto Ghiotto’s tail through the final corner, but experience told as Ghiotto held on to win by 0.4s.

Ilott was under no threat behind, with Schumacher well adrift in third.

Once again, Prema Racing showed its skills in strategy by being the first to call its driver in, but a delay on the front-right wheel held up Schumacher, although it made no difference to his end result.

Although Ilott had been ahead of Ghiotto at the time of his pitstop, he paid tribute to Virtuosi and said “it was a bit of a shame but I wasn’t going to win the race anyway. The tyres were not lasting – I don’t know what’s going on.”

Ghiotto confessed “it was the most stressful race I’ve done in my career. It was a bit of a bet but it just paid us.”

Saturday winner Robert Shwartzman made it a Ferrari junior 2-3-4 by following home Prema team-mate Schumacher, although there was some argy bargy and contact with fellow Russian Nikita Mazepin immediately after the pitstops.

Mazepin made it a good weekend for himself, the Hitech driver following up his Saturday second by finishing fifth.

Louis Deletraz (Charouz Racing System) and Red Bull Junior Jehan Daruvala (Carlin) were sixth and seventh. This duo were the highest-placed on the grid of a smattering of drivers who, in light of spectacular graining on the medium tyres on Saturday, decided to gamble on driving the race on softs.

That didn’t work, and those who had opted for this tactic pitted before half-distance to change onto mediums.

Renault F1 Junior Guanyu Zhou brought the other Virtuosi car through to eighth and the final point thanks to passing Giuliano Alesi (who went race long on mediums) and Marcus Armstrong over the final two laps.

Those to hit trouble included Williams protege Dan Ticktum, who retired his DAMS car after reporting a loss of power, and Carlin-run Red Bull and Honda junior Yuki Tsunoda, who as he did on Saturday had to pit for a new front wing.