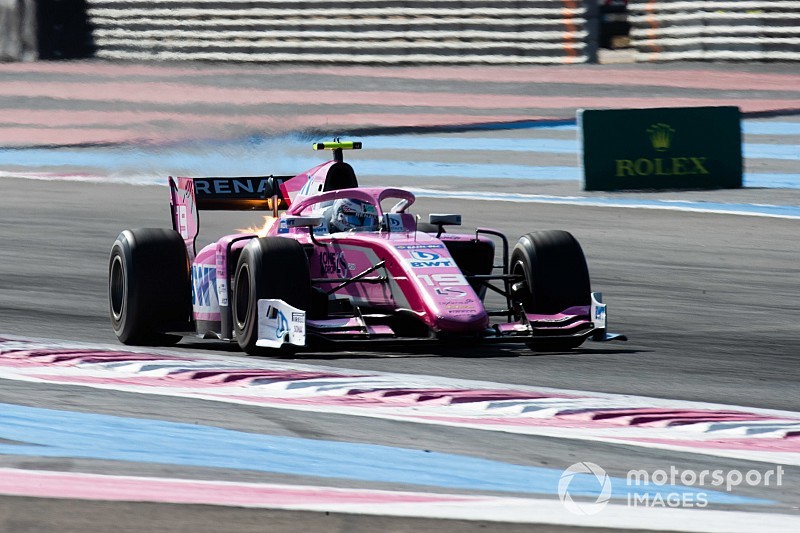 Hubert came under intensive pressure from Jack Aitken in the early stages but reacted to keep his fellow Renault junior at bay.

At the same time, Alfa Romeo junior Juan Manuel Correa pounced, demoting Aitken with force on lap six, which in turn allowed Hubert some breathing room to build a gap over two seconds.

On the same lap he’d been passed by Correa, another of Aitken’s fellow Renault affiliated drivers – rookie Guan Yu Zhou – made an opportunistic move at the final turn to steal a podium spot.

That sealed the top four positions, Hubert heading Correa, Zhou and Aitken. Hubert had struggled massively in practice and in qualifying, but his evergreen race pace gave him a second win in the GP3 champion's rookie F2 year.

An intense battle for fifth broke out between the DAMS drivers, which likely cost them any chance of advancing further forward as they battled each other.

McLaren junior Sergio Sette Camara looked quicker and jumped Latifi on lap 14 of 21. They then battled side by side for one lap and a half which helped Aitken build a two-second cushion. Sette Camara did close slightly, but not enough to challenge.

After a sensor issue the day before, Louis Deletraz showed searing pace to pass feature race winner Nyck de Vries for seventh, but honed in unsuccessfully on Latifi late in the race.

De Vries was passed by Callum Ilott and Nobuharu Matsushita in the closing laps, falling out of the points.

Ilott took the final point for eighth after crashing out of the feature race, ahead of Matsushita and de Vries.

Jordan King – who started third – went straight on at the first corner while defending second at the start from Aitken, and fell back through the field to take 11th.

Mick Schumacher’s run of pointless finishes was extended to six. After being clipped into an airborne crash by Prema Racing teammate Sean Gelael in Saturday’s feature race, he got a puncture in Race 2 and then pulled up at the side of the track after he pitted for new tyres.