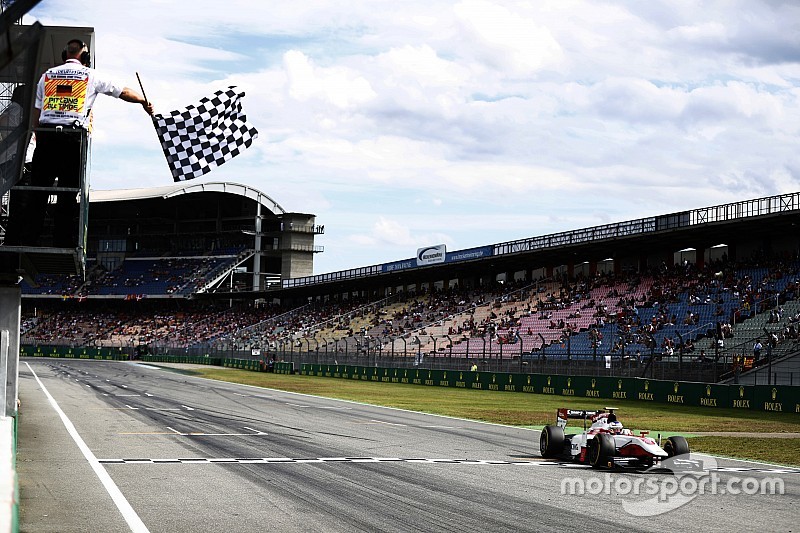 Sergey Sirotkin converted his pole position into victory in the GP2 feature race at Hockenheim despite having to pit twice amidst confusion over his first stop.

The ART driver made his first stop right at the beginning of a VSC stint and was ordered to make another visit to the pits later on as a result.

While Sirotkin led off the line, Pierre Gasly had a sluggish getaway and was only ninth after a couple of corners, eventually slumping down to P12 by the end of lap one.

Sirotkin was closely followed by Raffaele Marciello, the duo pulling away thanks to Norman Nato and Oliver Rowland battling behind.

The Briton went side-by-side with Nato for most of the opening lap before making his move stick at the Mobil 1 left-hander, with Alex Lynn also sneaking past.

Once the DRS was enabled on Lap 3, Marciello put massive pressure on Sirotkin.

Although his first attack on the main straight was defended well by Sirotkin, Marciello claimed the lead at Turn 8 next time around.

And while Marciello was building a safe advantage over Sirotkin, Alex Lynn overtook Rowland for third.

The MP Motorsport driver was first to change his soft tyres, Rowland pitting just before the Virtual Safety Car was activated due to Artem Markelov hitting Jordan King at the hairpin.

Just as the VSC started, Sirotkin went in to make his mandatory stop and managed to rejoin as high as fourth place as a result.

However, following another VSC stint as a result of Daniel de Jong taking out Sean Gelael into the hairpin, Sirotkin suddenly found himself under investigation for entering the pits under VSC.

After passing Nicholas Latifi and Nato and a stop from Marciello, Sirotkin was up to second by Lap 15, eight seconds behind Lynn, who was yet to pit.

Running on significantly newer tyres, Sirotkin closed in on Lynn in just five laps and took the lead from the DAMS driver with ease.

However, just as he took the lead, he was told to pit again as his stop under VSC did not count as his mandatory stop.

Sirotkin stopped for softs on Lap 26 and rejoined in provisional fourth place behind Marciello, Rowland and Luca Ghiotto.

While Marciello had an initial six-second advantage, Rowland had Ghiotto and Sirotkin all over behind.

The duo made quick work of passing the Briton at the hairpin with Sirotkin also overtaking Ghiotto next time around.

The Russian made the move just at the start of a third VSC period, caused by Lynn sending Nato into a spin while fighting for sixth.

Running on fresh softs, Sirotkin was two seconds quicker than Marciello per lap, allowing him to catch the leader in two laps.

Although Marciello managed to stay ahead following Sirotkin's first overtaking attempt, the ART driver was all over the former Ferrari junior and eventually made his move at Sachs.

Sirotkin then cruised to the finish to take his second consecutive GP2 victory, with Ghiotto also passing Marciello for second.

Having started the race on primes, Gasly made a strong late-race recovery to steal the final podium position from Marciello by outdragging the Italian to the finish line by a tiny margin.

Lynn completed the race in fifth but received a 10-second time penalty for his incident with Nato and was only classified eighth.

UPDATE: Markelov and De Jong both received five-place grid penalties for tomorrow's Sprint Race, which the duo will start from the pitlane.