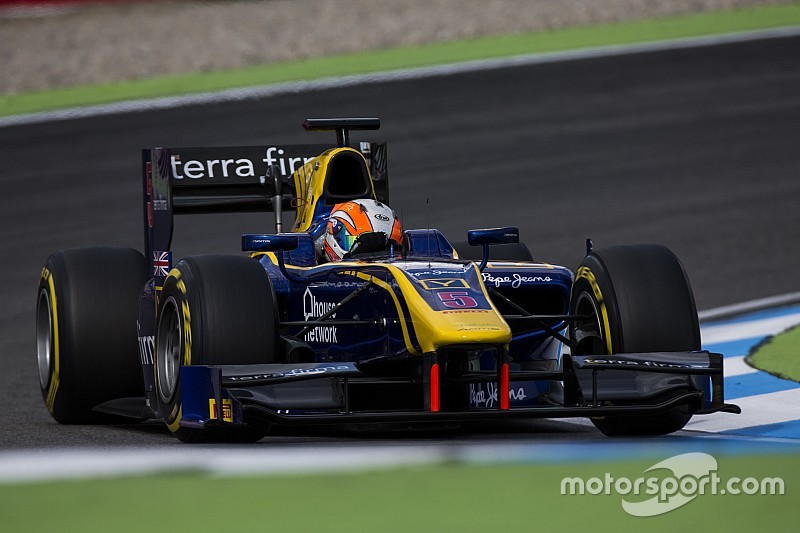 DAMS driver Alex Lynn claimed his second win of the GP2 season in a tyre wear-affected sprint race at Hockenheim, as Sergey Sirotkin drew level with Pierre Gasly on points.

Lynn led virtually from start-to-finish, holding off early advances from Oliver Rowland and never looking back as those behind him ran out of tyres.

Having been promoted to reverse-grid pole after his teammate Gasly's late-Saturday disqualification, Antonio Giovinazzi only led for mere moments after the lights went out in the sprint race.

The Italian suffered massive wheelspin off the line, with Lynn and Rowland breezing past - and while Giovinazzi did manage to hang on to third by forcing Arthur Pic off on corner entry, he'd later receive a time penalty for doing so.

With Lynn now leading the race, the Briton had to work hard to keep compatriot Rowland at bay early on, although the latter would soon have to focus on defending from Giovinazzi instead.

The VSC came out for the first time then as Nabil Jeffri forced Norman Nato over the kerbs at Turn 8, with an inevitable collision following.

At the restart, Rowland very nearly fell prey to Giovinazzi - and their battle eventually resulted in contact on approach to Turn 8, as Giovinazzi damaged his front wing against the Briton's car and came to a halt in the run-off.

That prompted a second VSC and further increased Lynn's lead - and, in the final green-flag stint, the Williams development driver had little trouble bringing the car home in first place.

Rowland, however, began to suffer massively with tyre degradation, coming under massive pressure from Sirotkin and eventually surrendering the spot.

On the penultimate lap, Rowland was then passed by Arthur Pic, who went on to claim his first podium for Rapax, and star rookie Luca Ghiotto.

However, the Briton just held off Pierre Gasly, the erstwhile championship leader producing a scintillating drive from P20 on the grid to P6 at the chequered flag.

Raffaele Marciello finished seventh, just ahead of teammate Artem Markelov, who decided to change tyres mid-race and was quickest of all in the final stint.

However, Markelov also landed a five-second penalty for speeding in the pits, giving up eighth to Gustav Malja as a result.

In the standings, Sirotkin and Gasly head the field with 113 points both, the Russian currently occupying the points lead on countback of third-place finishes.