Grosjean charges to pole at Imola

Former GP2 Asia Series champion Romain Grosjean set a new track record at the revised Autodromo Enzo e Dino Ferrari in Imola, Italy. Seeking his second Asian title the Frenchman tied Jules Bianchi in the points lead with today’s pole position time of 1:27.067, just edging Sam Bird off the top spot. In the second and final weekend of the Asia season the title fight is wide open and until Sunday’s sprint race there is no real clear leader for the crown.

“We know we have some really good drivers at the front,” said Grosjean in the qualifying press conference. “You say Jules, I will say Sam and some other. It will be quite complicated and tough here. But I enjoy the challenge and I am very happy for my team Dams and for myself as well." 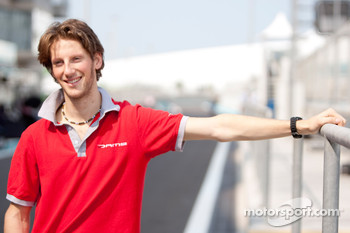 After both weekends that were plan to be held in Bahrain were cancelled on account of regional instability the series was left with little chance to have a full season. With at least another two races needed to make the championship worthwhile, Imola was quickly contacted to host a rushed finale before the start of the main GP2 series in May. Even in a reduced state the Asia Series offers a glimpse of which driver will be strong this year and allows upcoming Asian talent to settle into this competitive ladder series to Formula One. The title winner to be crowned Sunday will be given the opportunity to test in F1 and has a opportunity to move up to the premier class as did Grosjean in 2009 with Renault.

Still seeking a solid F1 ride for the future, Grosjean returned to GP2 this year with his eye on both the Asian and main championships. Starting on the front row tomorrow will give the Frenchman a good chance of achieving step one of his goal. In morning practice it looked Grosjean might not be a contender this weekend, having spun out and causing the session to be red flagged. Even with the setback, the DAMS driver was able to set the pace of the weekend.

“I tried to pass a bit faster in the second chicane and I spun there. I thought I could bring the car back on the track. But the grass was wet and it pushed me into the wall,” explained Grosjean.

As the clock ticked down to close the qualifying session it looked Sam Bird would earn the two points for pole until Grosjean bumped him from the spot. The Brit was fastest in practice and will give Grosjean a fair run off the front row in tomorrow’s feature race.

“I am relatively happy, not overly happy. I would have liked to have gotten pole position. I just got pipped at the end,” said Bird.

Third went to Michael Herck for Scuderia Coloni with Bianchi earning fourth on the grid. The Lotus ART driver struggled to improve in the morning session after coming out of the box fastest. With three talented drivers between him and victory the Frenchman will have a good fight on his hands to keep his rivals from taking the title in tomorrow’s feature race.