Racing Engineering’s Christian Vietoris took advantage early in today’s GP2 Series race before the skies opened up at the Circuit de Spa-Francorchamps to score the Feature race win. In the penultimate round in Belgium, Frenchman Romain Grosjean nailed down the 2011 main series championship.

“Finally everything came together. Of course, the pole position in bad weather conditions was also important,” said Vietoris adding, “The team work. You can see that we’ve improved since Silverstone. I was in the lead in Budapest and I made a mistake. So, I’m really happy that we could win here, one race later. It’s very positive.”

Jules Bianchi actually kept the new champion at bay as he placed his Lotus ART car on the second step of the podium. DAMS Team’s Grosjean finished third. The only driver who still had a shot at this year’s title ended up not finishing and thus the Frenchman who still has one race on the historic Spa circuit plus one more event to close out the season was able to notch the title early.

It was not a fantastic race, but it is the race where we did it.

Grosjean smiled as he said, “It was not an easy task today. You know it can be like a last serve in a tennis game, but if you miss it, then it can turn things around quickly. If you don’t take any special risk, that does not protect you from bad things. I knew I was lucky to be on the right side today on the grid. I was P3 after the start and we had to wait to see if it was going to rain. It was the same for everybody. I was keeping a good pace and at the same time tried to save the tyres. We pitted at the right time. It was not a fantastic race, but it is the race where we did it.”

It was a challenging maiden win for Vietoris after he had a perfect start when the lights went out on a semi dry track but he sailed into the early lead and built an early gap to his challengers. The German never put a wheel wrong or made a mistake even when the rain came on the 13th lap.

“Everything went according to plan. I was quite lucky to start from the right side of the track because it was cleaner. With the safety car, at the re-start, if you can make your own speed, it is easier than to follow the leader,” said Vietoris.

Luca Filippi was on the front row but Bianchi shot pass him to slot into second before the first turn. It was not the Scuderia Coloni driver’s day as Grosjean who started seventh – thanks to Charles Pic’s Barwa Addax Team adding fuel to his car during qualifying which excluded his times and moving him from third on the grid to the back of the grid – had a fantastic start, perhaps the best of his career, as he moved into third. Grosjean not only overtook Filippi for the position but he also flew past Adam Carroll (Super Nova Racing), Marcus Ericsson (iSport International) and Michael Herck (Scuderia Coloni).

“I think now I’m third in the drivers’ standings which is important for me and we will still continue to do the races as we did before now and try to be consistent and score as many points as possible and maybe try and get another win before the end of the season. Anyway this race has been very good for me,” Bianchi said.

As the top four pulled away from the pack, the action behind them intensified and Grosjean’s main rival Giedo van der Garde (Addax) was pushed off the track at the first turn and even though the Dutchman continued, he was at the back of the field. 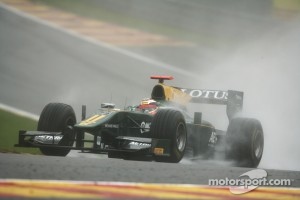 The forecast came true with the first drops of rain, so instead of the planned mandatory pit stops, the drivers stayed out on track as long as they could. When the light rain turned into heavy rain, the back of the pack was making their stop for the wet Pirelli tires and the leaders followed one lap later. The first safety car appearance was after the tire switch at the top of Eau Rouge when Rapax driver Julian Leal spun out of the battle.

No sooner had Leal been retrieved by the safety crews, Mikhail Aleshin was barely at speed when Stefano Coletti ran into the back of the slow moving Carlin team. With the limited visibility, the two collided which sent the Trident Racing car into the air. The safety car stayed on track. Aleshin was fine but Coletti needed immediately medical attention. No word at this time on the condition of Coletti.

Once the safety car was safely off track, the competitors had just one green lap to race to the checkered flag. On the wet track, they did not take any chances and the German pulled away to keep his lead and take his first GP2 series victory. Bianchi and Grosjean followed across the line but the racers behind them were fighting for position and points but also for the coveted eighth place finish.

As they headed to the finish line, Johnny Cecotto Jr was in ninth and looking for a way around Fairuz Fauzy and in a surprise move, Cecotto took the position away from the Malaysian. And then agony for the Ocean Racing Technology driver as his car slowed down and Fauzy ended today’s race eighth, which gave the Super Nova racer the Sprint pole for Sunday’s race.

Grosjean will hold off his championship victory as he prepares for tomorrow’s race, along with the rest of the GP2 field but now the pressure is off of the Frenchman. With van der Garde not finishing today’s race, the fight for the sub-championship is on with three races yet to be contested this season.


Medical report on Coletti shows that he will not race tomorrow or in the season finale’s two races. The Trident racer has two vertebral compression fractures.

After today's feature race GP2 officials reviewed the pass Fauzy made on Kral under safety car conditions. Upon talking with both drivers and looking at the video it was established Fauzy had reason to suspect Kral was slowing down due to a mechanical problem. Fauzy was awarded 7th in today's results, placing Kral in eighth with tomorrow's sprint race pole. 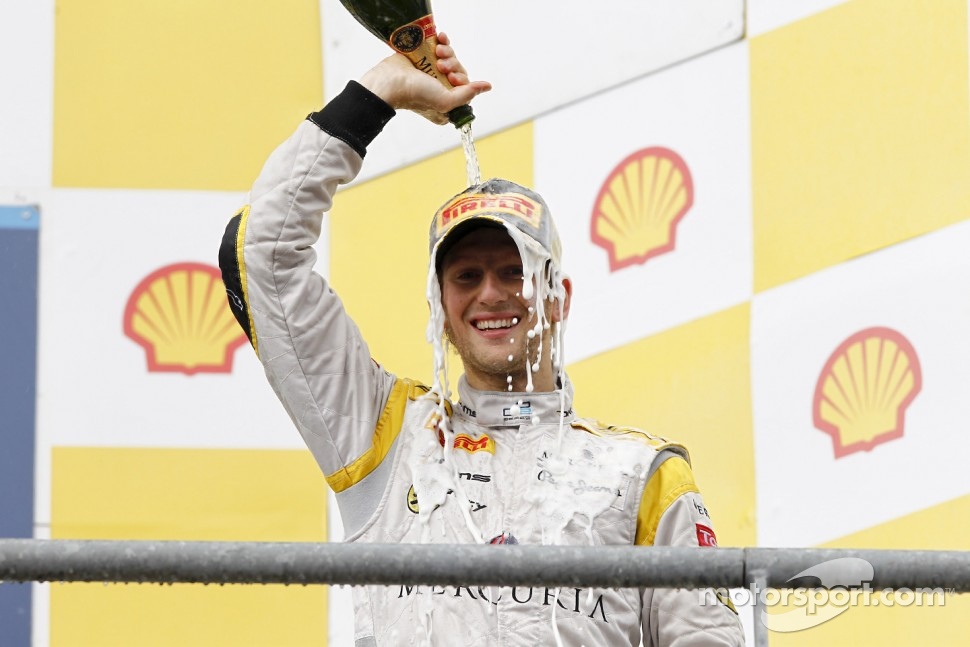