GP2 teams prepare for the heat of Hungary 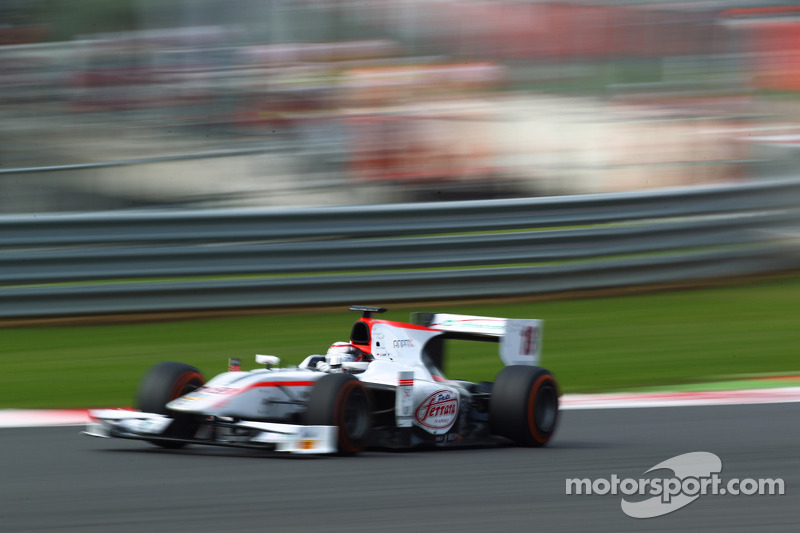 Presentation of the seventh round of the 2013 season

After a three week break, the action resumes for the GP2 paddock this weekend in Budapest, Hungary. The seventh round of the 2013 GP2 Series takes place at the Hungaroring, a famously twisty track and one of the slowest of the calendar, but also one of the trickiest with lots of turns and scorching temperatures that are always hard on both the drivers and the machines.

Last time we saw our drivers, it was in Germany where Marcus Ericsson and DAMS finally triumphed with a lights to flag win whilst Jon Lancaster and Hilmer Motorsport where busy dominating another Sunday race on the following day. Series leader Stefano Coletti fought like a lion from P14 on Saturday’s grid to third at the chequered flag following an epic battle with three other cars into the final corner. Felipe Nasr left the Nurburgring with a total of ten points: that’s five less than the Monegasque driver, but enough to keep his title hopes alive ahead of this week’s round in Budapest where his team Carlin scored their first ever GP2 pole and win last year with Max Chilton. Sam Bird had a disappointing weekend in Germany scoring only one point whilst Fabio Leimer and James Calado made a long-awaited comeback to the podium and kissed bad luck goodbye with 22 and 32 points respectively. The trio of drivers have closed in on the top 2 in the drivers’ standings and will be looking to get even closer before the summer break.

This sets the perfect scene for this weekend. Pirelli has nominated the P Zero White medium compound and P Zero Yellow soft compound: the same nomination that has been made for Formula One.

Pirelli’s racing manager Mario Isola says: “The Hungarian Grand Prix will provide a stark contrast to the most recent races at Silverstone and the Nurburgring, two of the faster circuits on the calendar, but even though the Hungaroring is a much slower circuit, it still has plenty of unique challenges which require the utmost concentration from the drivers. Hungary is characterised by its hot ambient temperatures and this weekend will be no different with long-range weather forecasts showing temperatures could reach 40 degrees Celsius on Saturday and Sunday. The heat combined with the twisty, bumpy nature of the circuit can prove very demanding on the tyres. It is also prone to churning up a lot of dust as it is one of the least used circuits of the year. The layout of the Hungaroring makes it extremely difficult for drivers to overtake and as a result of the circuit’s twisty nature, the medium and soft tyres allocated for GP2 could lead to a significant performance difference.”

Jolyon Palmer hungry for big points in Budapest this weekend