A thrilling GP2 race in Hungary, in mixed conditions, gave the opportunities needed for drivers to come from the back of the grid to the front. Unfortunately Super Nova were unable to capitalise on this, although Adam Carroll had the potential to. Rain just prior to the race left a difficult tyre choice on the grid and unsurprisingly, the teams towards the back of the field chose to gamble on slicks - including both Super Nova drivers. Fairuz unfortunately had a handling problem with his car, possibly as a result of damage from race one, and he was forced to retire the car in the pit lane early on in the race. Adam looked like he had good pace, especially when the track dried out more, but he was penalised for a jump start and handed a drive through. After this Adam was one of the quickest cars on track but when rain reappeared later in the race, the team gambled again to leave Adam on slicks. This didn’t quite pay off and he was forced to pit for wets when the track got wetter, leaving him with a solid run to 12th place.

“Well another disappointment for this weekend, I never expected it to end up like this. When I went out I could feel that there was something wrong with the car and in these type of conditions it was made even worse. We just need to check the car now we have three weeks gap and hopefully we can find a solution to bounce back strongly for Spa. We’ve had a few bad races now and we need to make the most of this period now to try to solve the issues we have had.” 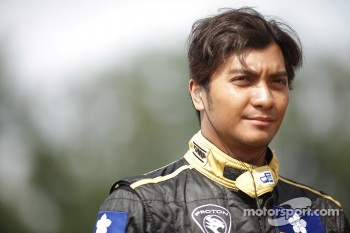 “This race was a big challenge from the start just to choose the right tyres, because it was pretty wet still and a marginal call. We went for it because of our grid position and it nearly paid off, then just as the track was really coming to us, it rained again. So after a spin and a drive through, to finish 12th was a good result.””

“This is certainly not one of our finest weekends, with two DNF’s for Fairuz and a difficult weekend for Adam. There is clearly an issue with Fairuz’s car which forced him to stop and we will need to find this problem once the cars get back to our workshop. Adam looked to have good pace today when the conditions were right for the tyres he was one. We decided to take some risks today in an attempt to get a result but this, on top of Adam’s drive through and spin didn’t quite pay off.””

Carroll gives up WEC to focus solely on Formula E