Luca Filippi ended the action packed weekend on a high note, taking the lead on a restart to score his second GP2 Series victory. The Scuderia Coloni driver started the Sprint race from fifth on the grid for the second of two races at Circuit de Spa-Francorchamps and on the first lap, overtook Dani Clos and Fairuz Fauzy for third and went into chase mode. Jules Bianchi added more valuable points with his second place finish and early leader Josef Kral ended third.

“The start was okay but after that I think we’ve shown a very strong pace, we were so much faster everywhere. I was super quick through Eau Rouge. I was able to take it flat out with a very clean line, the steering wheel almost straight so I was exiting in the corner with a great speed. This is one of my favourite corners in the world. I was trying to focus in that corner to have enough speed to overtake. That is what gave me the chance and after that we have the point for fastest lap. It’s a perfect day,” said Filippi.

...we were so much faster everywhere. I was super quick through Eau Rouge.

Kral took the lead at the start in his Arden International team car from pole position and held it for the majority of the race even with Johnny Cecotto applying pressure while Filippi was setting fast laps and looking for the right opportunity to take second away from the Ocean Racing Technology driver. The battle heated up with the Italian briefly moving into second until the Venezuelan replied back. It was obvious that Filippi had the faster speed, setting hot laps in his chase for the victory and on lap 7; he was able to fly past Cecotto for second and placed his focus on Kral.

While the top three were in their own fight, Fauzy, Dani Clos, Bianchi and newly crowned champion Romain Grosjean were having their own battle for fourth, which was quite intensive. The Frenchman for the DAMS team was able to get past Clos and following up on that move; Clos moved his Lotus ART racer into sixth on the final turn. In a matter of seconds, the Spaniard went from fifth to seventh as both Frenchmen overtook him but as they headed into turn one, Bianchi elected to get in front of Grosjean and ran wide, allowing Clos to take back sixth position. While those three were busy with their fight for fifth, the Malaysian driver for Super Nova Racing was comfortably holding down fourth. Sneaking up behind the four was Sam Bird as the Briton was watching the fight and ready to pounce in his iSport International car.

The safety car was dispatched when Rapax driver Fabio Leimer crashed at Eau Rouge on lap seven. Leimer was okay but the field was packed up, allowing an all-out chase for the podium.

Kral kept the lead at the restart but it was not long before Filippi was able to make his move, taking the win out of the hands of the Czech driver while the rest of the top runners were in a tight pack, looking for the coveted podium positions. 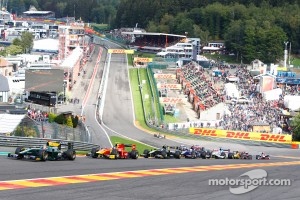 Cecotto was under pressure from Fauzy who was under pressure from Grosjean. Clos was close at hand as was Bianchi. Fauzy unfortunately went wide at the first turn and the trio behind him were side-by-side as they exited Turn 1. As they went into Eau Rouge, Bianchi was in fourth and the Frenchman could smell the podium while chasing down Cecotto. It did not take long for Bianchi to move into third before giving chase to Kral while Filippi built a gap to those behind him. Once he overtook Kral for second on the final lap, Bianchi knew the points earned today would further open the door for him to have a shot as the GP2 vice-champion; especially since Giedo van der Garde for Barwa Addax Team was having probably his worst weekend of the season. The Dutchman scored no addition points this weekend and the two are separated by only one point as they head to Monza, Italy for the season finale’s two races.

"It was amazing for me and my team," said Bianchi. "We improved the car a lot from yesterday. There is nothing to say. We just need to keep pushing for Monza to try and finish second in the drivers’ standings. But I do not focus too much on that. I just try to think about the race and to be quick and then we will see at the end of the season."

"We need to be focused and calm. Van der Garde will be quick there for sure, same for Pic. We don’t have to forget Sam and Filippi now so of course we have to push and keep our momentum," added the Frenchman. 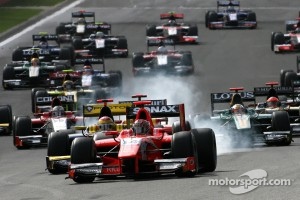 Start of the race, Josef Kral

Once Bianchi made his move, Grosjean and Clos both followed suit and moved Cecotto down the running order. The duo were now fighting for podium slots. That is when Sam Bird joined in on the fun. Kral was able to hold off the champion to place third.

"It was quite tough at the end of the race," admitted Kral, "but I am happy to be back on the podium. We overcame our problems in the last few races. We’re getting better again and I hope that in Monza we will have a similar weekend."

Grosjean was fourth followed by Bird in fifth, after the Briton disposed of Clos. Cecotto slipped down to seventh as Lotus ART’s Esteban Gutierrez made the move past the Venezuelan.