Filippi sets the pace in day one of Barcelona testing

The thirteen GP2 Series teams are back on track at Circuit de Catalunya in Barcelona this week for a two-day post-season test session. Many new faces joined the field as some familiar names switched to different teams.

The morning session opened in cloudy and cold conditions. The first hour was rather quiet and mainly used for installation laps as newcomers got to grips with their new machines and teams waited for the temperatures to rise. It was rookie Kevin Giovesi at Venezuela GP Lazarus who first set a laptime in the opening thirty minutes of the session, but he was soon bettered by Daniel De Jong at Scuderia Coloni. 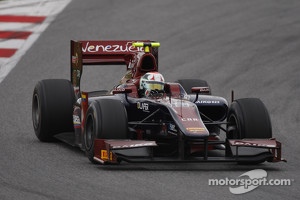 As drivers started on their first runs, Stéphane Richelmi at Lotus GP went top, but it was only temporary. Luca Filippi set the quickest laptime, 0.03s faster than the Monegasque driver, before spinning and stopping his Scuderia Coloni car at Turn 5. The session was shortly red flagged in order to retrieve the Italian’s car.

Halfway through the session, Marcus Ericsson at Trident Racing moved up to P2 and in the final hour, Filippi went under the 1m30s barrier, three tenths quicker than the Swede. In the closing stages, De Jong found some extra pace to move up to P2 ahead of Nigel Melker (DAMS), Ericsson, Richelmi, Rio Haryanto (Carlin), Adrian Quaife-Hobbs (Addax), Stefano Coletti (Rapax), Mitch Evans (Arden) and Jake Rosenzweig (Addax).

The afternoon session opened yet again under grey skies and cool temperatures. Both Rapax cars and Felipe Nasr (Carlin) were the first ones to feed onto the track. The Brazilian set the early pace ahead of Coletti, but it was Daniel Juncadella who took control of the timesheets after thirty minutes ahead of teammate Coletti and Giovesi. The standings remained unchanged until De Jong moved up to P1, a mere 0.004s ahead of Juncadella. The Dutch improved on his best time, further increasing the gap to his closest rivals. Ericsson moved up to P2 just before Rene Binder spun and stopped at Turn 5 bringing out a quick red flag. 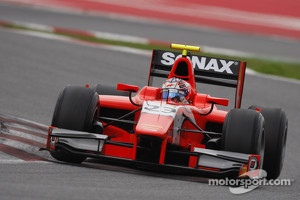 In the closing stages, rookie Arthur Pic lost control of his DAMS car and went off at Turn 12 interrupting the session again and it was restarted with five minutes left on the clock. At the chequered flag, De Jong remained top ahead of Ericsson, Juncadella, Coletti, Alexander Rossi (Caterham), Richelmi, Quaife-Hobbs, Evans, Rosenzweig and Giovesi.

Tomorrow’s session will start at 9am local time.