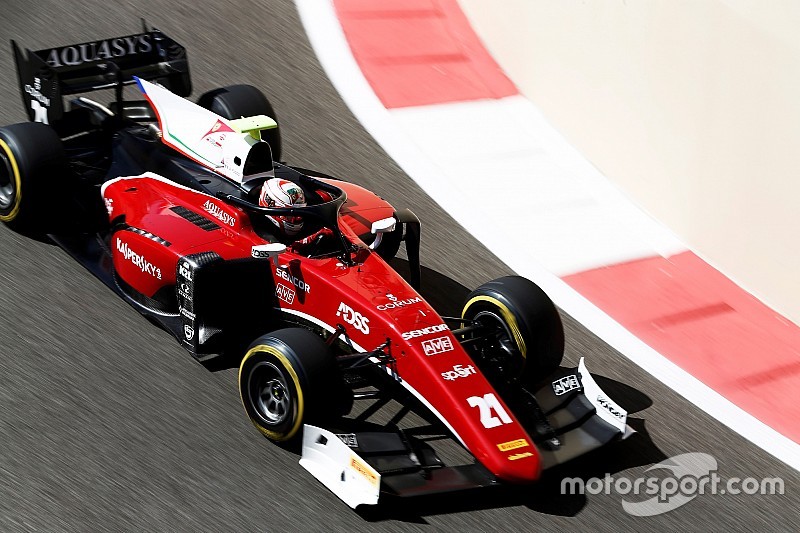 Starting second, Fuoco had a better start than polesitter Merhi and led off the line, but the race was soon neutralised with a Virtual Safety Car when Sean Gelael divebombed Niko Kari at Turn 14.

Fuoco's lead was not in danger on the restart and his gap even increased when Merhi ran off-track, establishing a lead of over one second.

Merhi was not able to close in on Fuoco to challenge for the lead for the rest of the race, the Italian eventually taking the chequered flag for the second time in 2018 by 1.7s.

At the same time, Merhi's second place was not challenged by Norris until Briton closed the gap in the final few laps and put pressure on the Spaniard.

It took until the last lap of the race for Norris to pass Merhi, benefitting from the Campos driver locking up at Turn 8.

With second, Norris took the runner-up spot in the championship from Alexander Albon, who collected just one point during the weekend for eighth in the sprint race.

Nyck de Vries was overtaken by Norris on the opening lap and then George Russell soon after the VSC restart, the ART driver then closing the gap to Norris for a few laps but ultimately unable to challenge the McLaren junior.

The 2018 champion eventually settled for fourth followed by de Vries and Louis Deletraz.

Deletraz kept Artem Markelov at bay, the Russian unable to charge up the order on his final F2 race, running off-track several times in the process.

Albon (DAMS) made a forceful move on Luca Ghiotto (Campos) for the final points-scoring position, the Campos driver even having to run through gravel at Turn 13, as Sergio Sette Camara completed the top 10 after a pitlane start.

Both Sette Camara, who stalled, and Gelael incorrectly lined up on the grid, prompting an extra formation lap, while Nicholas Latifi stalled on the actual start and could only take 15th and last.

F2 debutant Dan Ticktum retired with a gearbox problem while Tadasuke Makino retired on the opening lap and Arjun Maini did not take the start.