The New Zealander made the most of a strong start from the front row to overhaul polesitter Liam Lawson to complete a light-to-flag win.

Lawson was unable to really threaten Armstrong until the final lap and settled for second, while Juri Vips claimed the final spot on the podium.

Although there wasn’t much action in the fight for the win, there was plenty of overtaking behind with Jehan Daruvala starring after climbing from 11th to fifth.

Title contender Guanyu Zhou was lucky not to lose further ground in the championship as points leader Oscar Piastri finished ninth and was unable to capitalise on an early spin that dropped the Chinese driver to 17th at the flag.

Armstrong made the best start from the front row as he pulled alongside his countryman and polesitter Lawson, who moved across to try and halt Armstrong’s progress.

Lawson’s defence was not enough as Armstrong grabbed the lead after the pair squeezed through the first two turns with Lawson running wide and having to cede the lead to Armstrong.

The field managed to navigate the first two turns unscathed but the clean running only lasted until Turn 4 when debutant Olli Caldwell appeared to make contact with Guilherme Samaia, firing the Charouz into the inside wall. The out-of-control Samaia then tagged his innocent teammate Marino Sato into a spin, putting both cars out of the race.

The incident, investigated by the stewards, triggered a Safety Car to allow marshals to clear the track.

Racing resumed on lap four but it wasn’t long until the race had its second incident. Title contender and 2022 Alfa Romeo F1 driver Zhou attempted to pass Christian Lundgaard for sixth down the inside at Turn 1 but the pair made contact. As a result, Zhou was sent into a spin while suffering a broken front wing that necessitated a trip to the pits.

Once racing resumed for a second time, this time after a virtual safety car, Armstrong led Lawson with Boschung third. Vips held fourth ahead of Felipe Drugovich.

Lundgaard dropped to eighth following the collision with Zhou, allowing Theo Pourchaire and Robert Shwartzman into sixth and seventh respectively. Piastri dropped behind Daruvala but remained where he started in 10th after Zhou’s demise.

Shwartzman then managed to pass Theo Pourchaire but did so by running off the track and gaining advantage which would ultimately result in a five-second penalty. 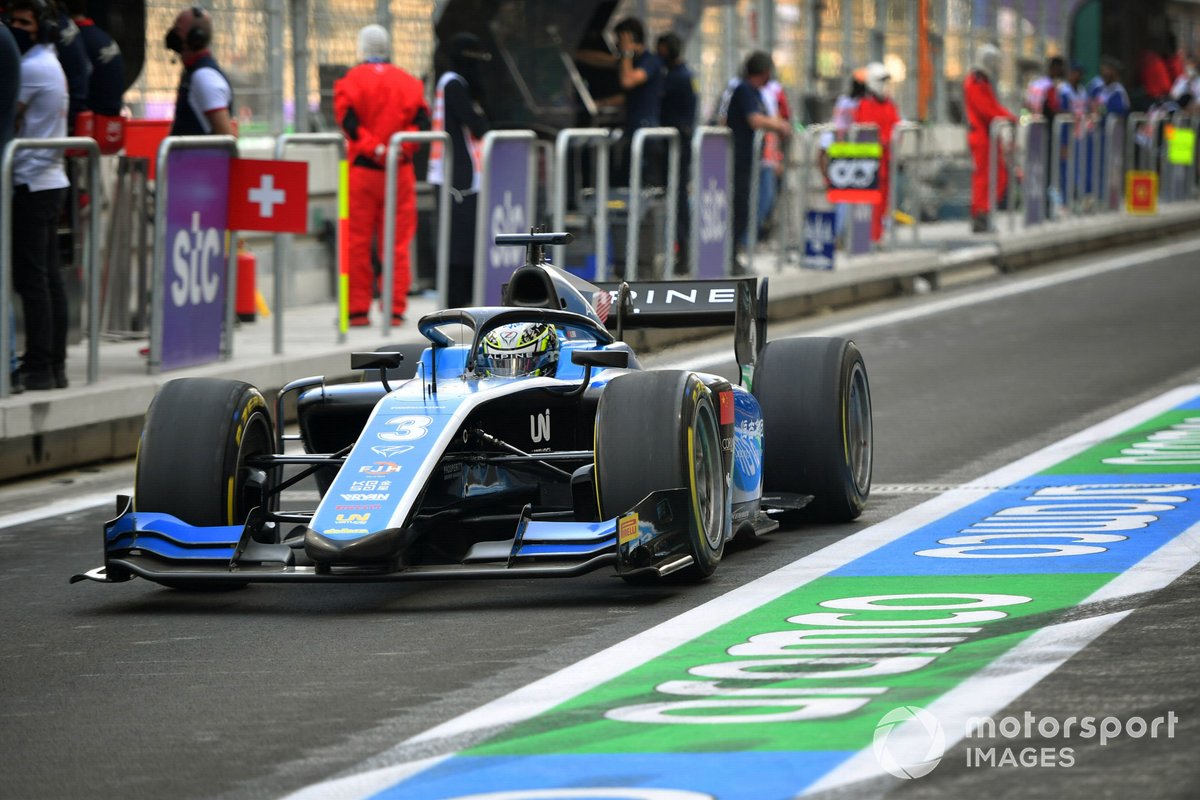 As the race reached the halfway mark, Vips managed to squeeze by Boschung for third and it wasn’t long before Drugovich caught and passed the Swiss for fourth.

Boschung continued to struggle for pace as he fell into the clutches of Shwartzman, who made light work of overtaking the Campos driver to claim fifth. Boschung fought back and reclaim the position but Shwartzman dived underneath at the hairpin to take the position back again.

While Armstrong led Lawson at the front with Vips and Drugovich in fourth, there was plenty of action behind as a five-car battle developed for eighth. The frantic action resulting in Piastri taking eighth as Boschung plummeted down the order.

The race was neutralised by the safety car for a second time when seventh-placed Pourchaire found the barriers at Turn 22 after losing control of his ART.

Armstrong came under pressure from from Lawson at the end but managed to hang on for the victory.

Daruvala managed to claim fifth benefitting from a penalty for Shwartzman and a stunning two for one pass on Lundgaard and Piastri late on.

Shwartzman was eventually classified in sixth ahead of Lundgaard, a charging Dan Ticktum and Piastri.

Bent Viscaal rounded out the top 10 and will start from pole position for the second sprint race, scheduled to start at 2140 local time (1840 GMT).