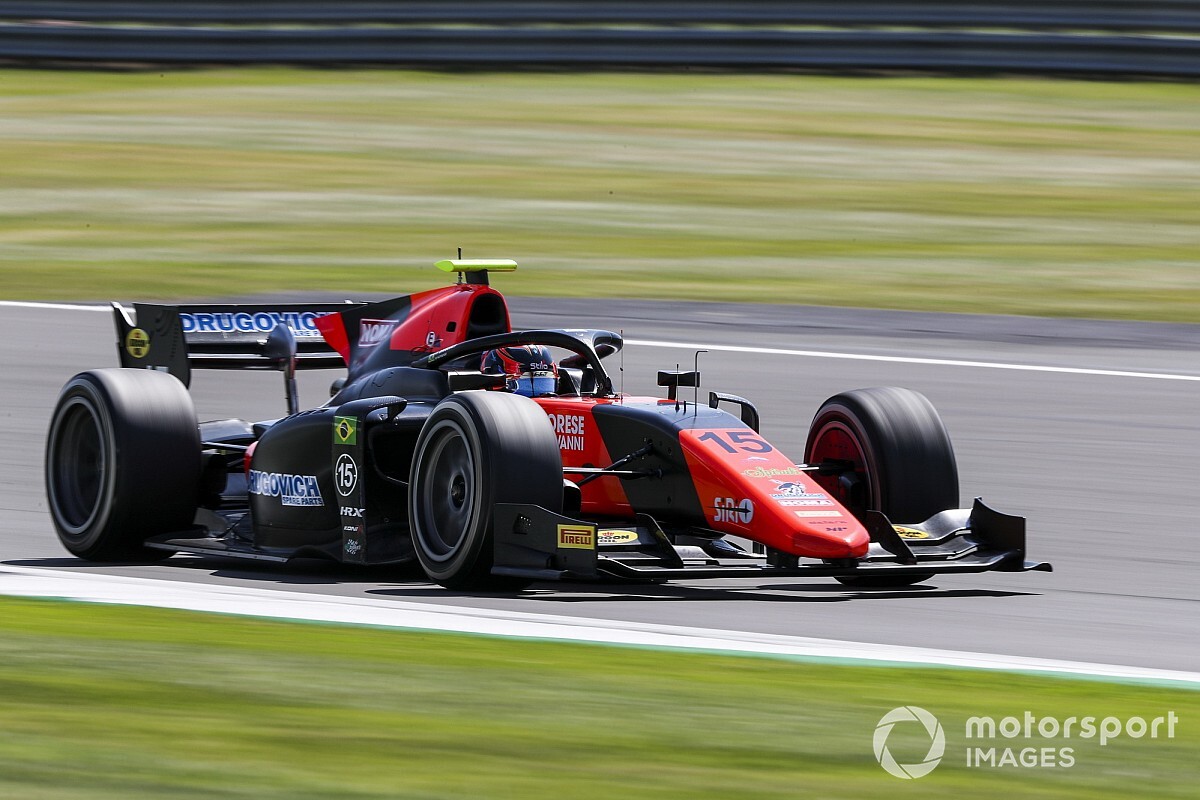 After a particularly impressive middle sector, Drugovich posted a 1m39.527s time to take control of the session, which remained unbothered as his rivals completed their runs.

Although the mercury touched 31C at the top of session, the threat of rain lingered on the teams’ radars to put pressure on the teams to deliver.

This meant that traffic was frequently a factor but, having gone out early, Carlin driver Jehan Daruvala was quickest after the initial flurry of runs having transcended ART’s Christian Lundgaard for the early bragging rights.

But after the gap between runs as the drivers took new medium compound tyres, Daruvala’s teammate Yuki Tsunoda looked to have the edge in the first sector before going wide at Copse and failing to improve.

The centrepiece to Drugovich’s time was a brutal middle sector, in which he went half-a-second quicker than then-leader Daruvala to eclipse the Carlin driver by 0.6s in total.

Callum Ilott will start alongside Drugovich on the front row, having been 0.139s down on the Brazilian driver.

Mick Schumacher rose above a difficult session to claim third, and will start alongside Renault junior driver Lundgaard on the second row in tomorrow’s feature race.

Prema pair Schumacher and Robert Shwartzman were forced to run out of sequence having encountered a profusion of traffic on their initial hot laps.

In particular Trident’s Roy Nissany made a frequent nuisance of himself in the first half, baulking Schumacher’s first attempt at a hot lap into Club - and offered HWA’s Giuliano Alesi the same treatment as the Frenchman logged a time.

Schumacher took to the radio to air his grievances, also sending Nissany a few choice hand gestures while side by side.

Nikita Mazepin logged the fifth fastest time for the Hitech team, beating Jack Aitken – who was firmly in the battle for pole.

Aitken had impressed in his first set of runs and briefly held pole before Lundgaard assumed the mantle, and his final run looked good enough for the top three before the Campos driver snagged the final exit kerb onto the start-finish straight.

Daruvala couldn’t improve in his second runs and had to be content with seventh on tomorrow’s grid, while Ilott’s UNI-Virtuosi teammate Guanyu Zhou was eighth-best with his late effort.

Tsunoda, who topped practice earlier on, fell down to ninth place and will start alongside Charouz’s Louis Deletraz on row five.

Drugovich’s MP stablemate Nobuharu Matsushita was 11th, having had an earlier time deleted for a track limits infringement.

Like Schumacher, Shwartzman was also embroiled in traffic, having encountered Nissany and DAMS’ Sean Gelael in the final array of corners – having arguably blocked Gelael a few laps prior on the Hangar Straight in an attempt to find space on track.

The current championship leader was put under investigation for that blockage, but could do no better than 18th - just 0.005s clear of Nissany, who also endured a spin at Copse to compound his misery.