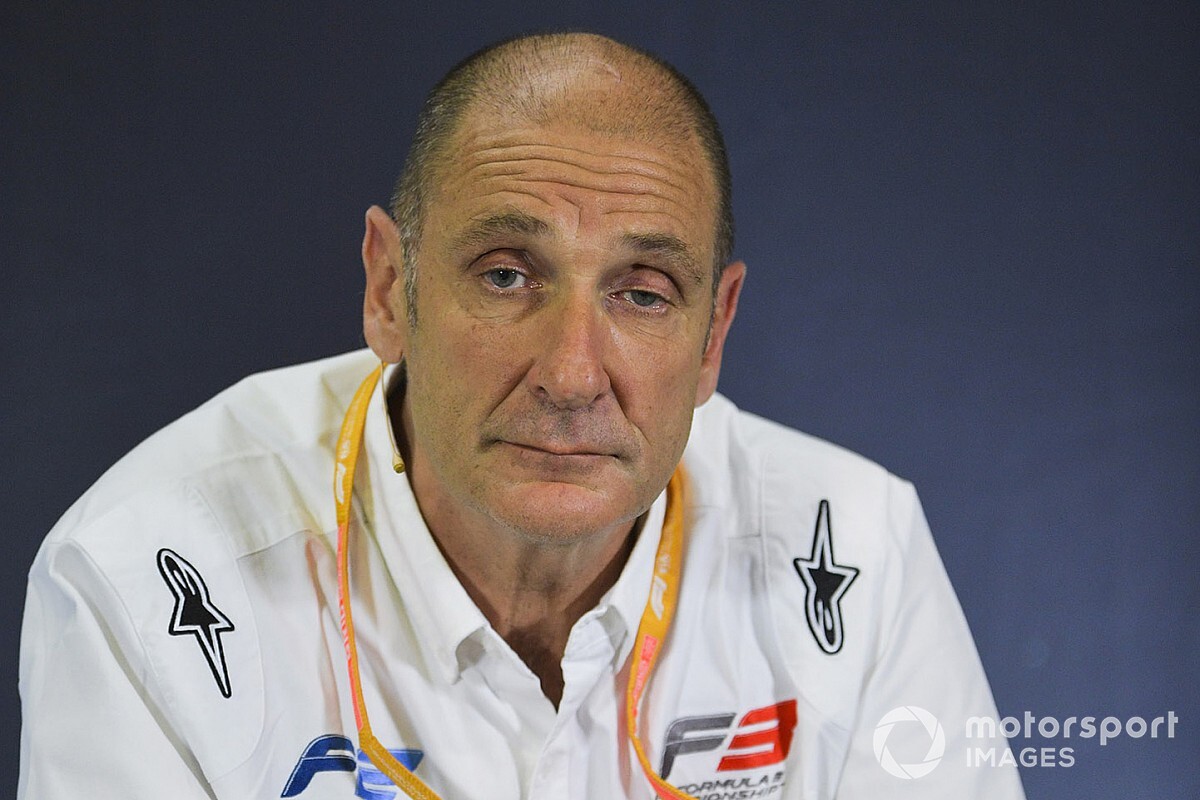 In the latest part of the #thinkingforward series, Formula 2 and Formula 3 boss Bruno Michel reflects on how the two championships reacted to the COVID-19 crisis and how they plan for a sustainable future.

As head of Formula 2 and Formula 3, Michel presides over a vital step in the pipeline of driver talents to Formula One. Recent graduates like Charles Leclerc, Lando Norris, George Russell, Alex Albon and Lance Stroll highlight the vital role that these two championships play. This weekend they start again, alongside F1 in Austria and we spoke to Michel shortly before he departed for Austria about how close the Covid-19 crisis came to shutting down F2 and F3 teams and drivers and the how the feeder series builds back better.

Q: You survived the last three months of lockdown, how important is it to restart racing now?

BM: If the teams don't race, they have no revenue. And if they have no revenue, there's a big risk that they are going to collapse. So the fact that we are able to go back racing, even if it is behind closed doors, we are very happy. I think it's important because people want to see some images of motor racing now as they have only seen virtual images for the last few months, and to have some real images it's quite important. The fans are all expecting that.

Q: Do you think that this compressed season with closed door events will be enough to stabilise the situation?

BM: It's a good start, let's put it that way. We are all expecting that the second part of the season is going to happen as well. We don't know yet where and when, but we should not finish the season with only 8 events with F3 and with F2. So, it's a way to go forward, but it's not the end of the problems for sure.

Q: There's a lot more attention on Formula Two and Formula Three because in the last few years you've produced a lot of very exciting young drivers that have come into Formula One like Leclerc, Norris, Russell. Albon to name but a few. There's a real excitement and momentum behind this young driver pipeline. So, your decisions now about how you shape F2 and F3 and the cost structure going forward are critical in making sure you have the best young guys coming through...

BM: You're absolutely right. We've been helped a lot by the fact that for the last two or three years we've had some fantastic drivers arriving from F2 or GP2 into F1. I would say that, you know, I've been through some years with GP2, where people were telling me it's difficult, because you need to be experienced to win the series. And I've always answered the same thing: when you have the right driver, you have the right result. And if you look at the drivers who won as rookies in F2 or in GP2, they've all been incredibly strong in F1 after that. So, we were, I would say somehow quite lucky to get Charles Leclerc, George Russell and then last year three drivers got to F1. It's been quite amazing. We're not the only ones responsible for that, let's put it that way. We have to give them a product that allows them, number one, to be able to show how strong they are. We need to have a car that is quite highly performing and at minimal cost. And number two, we have to have great racing. But on the other hand, I don't think it's the format itself that made those drivers arrive in F1. It was the drivers themselves. And we have had some absolutely outstanding drivers over the last few years.

Q: You moved quite quickly after the lockdown to protect the teams: you paused invoices, you spoke to suppliers etc. How essential were your actions there to secure a future for the teams and the championship?

BM: It was important both economically and also psychologically. Economically, it was quite obvious. The teams were not going to receive the revenues, because as I said, when they are not racing they are not getting revenues. So we knew that we had to do something about it. So immediately I started to get in touch with the teams, to tell them that they didn't have to worry about [payments]. I discussed that with Chase [Carey, F1 CEO] and Ross [Brawn] first, and then we had to pass information to the teams that until further notice we were freezing our invoices past and future, because during this period there were some invoices that were due to arrive and we paused them as well.

The main thing was to make sure that they were kept in a situation where everybody could resume for when we were saying 'okay let's go back racing'. This means that they should not have lost their drivers, and that was also a very important thing, so the drivers needed also to be kept in the loop of what was going to happen, because they also had issues with their own sponsors. So, let's say that two or three months were acceptable. If it would have lasted the whole season, I have no idea who would have survived the season.

Q: A lot of people have talked about the need to consolidate junior championships if they're to thrive in the post crisis world. What's your feeling around that?

BM: Over the last 15 years, there's been many, many series trying to come into this business. And at the end of the day, a lot of them, arrived and disappeared. I think the reason for that is, it's not that we're better than the others. It is that we had a specific way of paying attention to things in the culture: that we knew what was going on with the teams and we worked quite closely with them so we knew what were the problems. When we had the crisis in 2008, we knew what we had to do to try to help the teams to go through this crisis. Some other categories, could not, or did not do that.

The cherry on the cake, has been to become the official FIA feeder category. When GP2 became F2, and then when FP3 and FIA Euro F3 to become the new FIA Formula 3 championship. So now things are quite clear. And it's more all the levels, under those two categories that are being now into reshuffling and reorganisation. But the pyramid is working quite clearly, I would say at the moment.

And also the FIA is making things in such a way for the attention of the super licence or the licence points to make sure that the drivers should go through this pyramid, to be able to arrive to F1. The idea is to train drivers for F1. We have to make sure that the best drivers are actually going to F1, if they have a budget issue or not, that's something that is very important. And the other thing is that we have to make sure that they are ready for F1 when they get there. And I think our track record over the last two years, has proven that it's the case.

Q: It's not just the FIA who are supportive of F2 and F3. Liberty Media are also very keen on it and wanted to be very strong as a platform for the future. How encouraged are you by their approach?

BM: They've been incredibly supportive from the very beginning. I must say that I have this feeling now that over the last two or three years, F2 and F3 have become completely strategic for the F1 Group. Not only because we're bringing drivers to F1, but also because when we come to an event, we're creating a fantastic event, we're helping them to put on a fantastic event. And we've got between F2 and F3, four races each weekend, with two sprint races. You know there are a lot of things that we're doing and that F1 is very interested in. The other thing as well is that over the last two or three years, not only the TV broadcasters have increased the TV viewers, massively for F2 and F3, but also we had a quite small presence on social media [before]. With the arrival of Liberty, for sure, it changed. And now we are doing many things that we were not doing in the past.

Q: There is a great opportunity here that's been opened up by the rise of esports. This lockdown period has shown a new way for the drivers to relate to the audiences. And as you know, building a profile for a driver at this early stage, the F3/F2 career is really important, isn't it. What do you think about the way that people like Leclerc and Norris have related to fans on Twitch and built their profiles and can it work in real racing?

BM: I think it's absolutely fantastic. I completely agree that this was quite unexpected as well, but they really, really have been able to get in touch and to play with the fans, and to give them the opportunity to be also very much involved in these races. For us, we know that we have a fan base that is quite young. It is younger than Formula One, and that's something that we've learned over the years, which is quite interesting because for F1 to know that F3 and F2 has a fan base that is younger than F1 is quite good.

And obviously for our drivers to be able to liaise with their fans, you could see some cameras in their home and see them playing with the simulators and then they had interviews with that and they had Twitch, it was something that was quite unexpected.

Q: Before the coronavirus crisis, the world was moving towards a time where sport needed a sense of purpose, questions of sustainability, diversity and so on. Now we're coming out of lockdown and back to a new normal, do you think these issues will now get accelerated a lot more and they will be at the forefront of all sports, including F2 and F3?

BM: I really hope that there will be some definite changes that will last after the virus. We don't know if the virus has gone or not. But I really hope that some habits are going to change. Sustainability is something that we absolutely need to continue working on. And at the moment we're working on quite some big projects with F2 and F3 and I can't really talk about them at the moment as it is a bit too early. But we are trying to achieve some new levels on the sustainability issue.

And if you look at the diversity of the drivers in F3 and F2 the last 10 years, we have had drivers from all over the world, almost every year. It's something that we've always been quite proud of. And it's something that we want to try to develop. On gender, we had last year one female driver in F2. We will have one in F3 this year but that's something that we need to work on as well, because otherwise, we're not going to be in line with our time, and we need to be very careful with that.