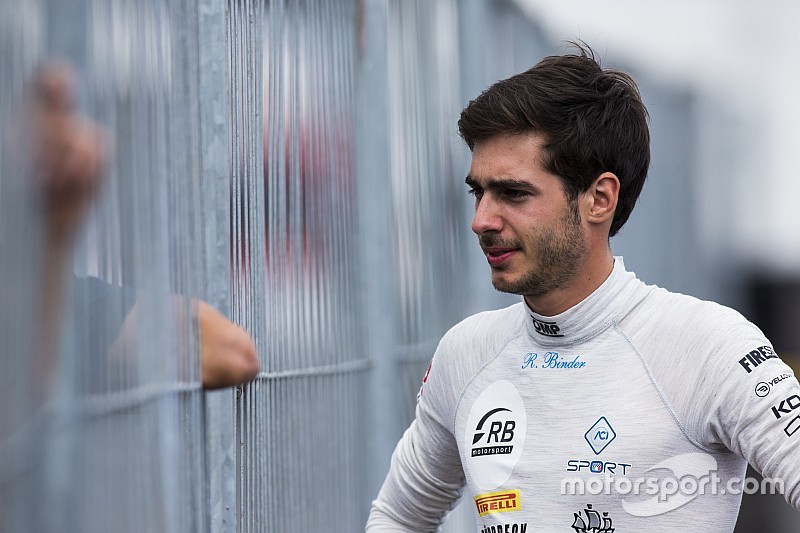 Rene Binder will replace former Formula 1 driver Roberto Merhi at the Rapax Formula 2 team ahead of this weekend’s round at Jerez.

Binder, who is currently fifth in the Formula V8 3.5 championship with the Lotus squad, will race alongside Louis Deletraz during F2’s standalone weekend away from the F1 support bill at the Spanish circuit.

The Austrian driver previously raced in the second-tier series between 2012 and 2016 when it was known as GP2, and scored a best finish of sixth in the Monaco sprint race in 2013.

Merhi drove in 14 F1 races for the Manor squad in 2015 and took part in the two most recent rounds of the F2 season for Rapax – at Spa and Monza – in addition to an appearance for Campos Racing at Barcelona during the early part of the year.

The Spanish driver, who was on his way to watch the Vuelta a Espana cycling race when it passed near to his home when he received the offer to replace Sergio Canamasas for the races in Belgium and Italy, is 17th in the drivers’ standings.

He scored a best finish of fifth in the Monza sprint race and recorded a double points finish at Spa.

Binder is Rapax’s fifth different driver of 2017 after Canamasas replaced Johnny Cecotto Jr, who took part in the opening four rounds of the season before running into budget problems, for the events in Austria, Britain and Hungary.

McLaren F1 junior Nyck de Vries also started the season with the team before he joined Racing Engineering in a seat swap with Deletraz prior to the Spa round in August.

Motorsport.com understands the arrangement for Binder to race with Rapax is for Jerez only with the team set to take a view on its line-up for the Abu Dhabi season finale after this weekend.