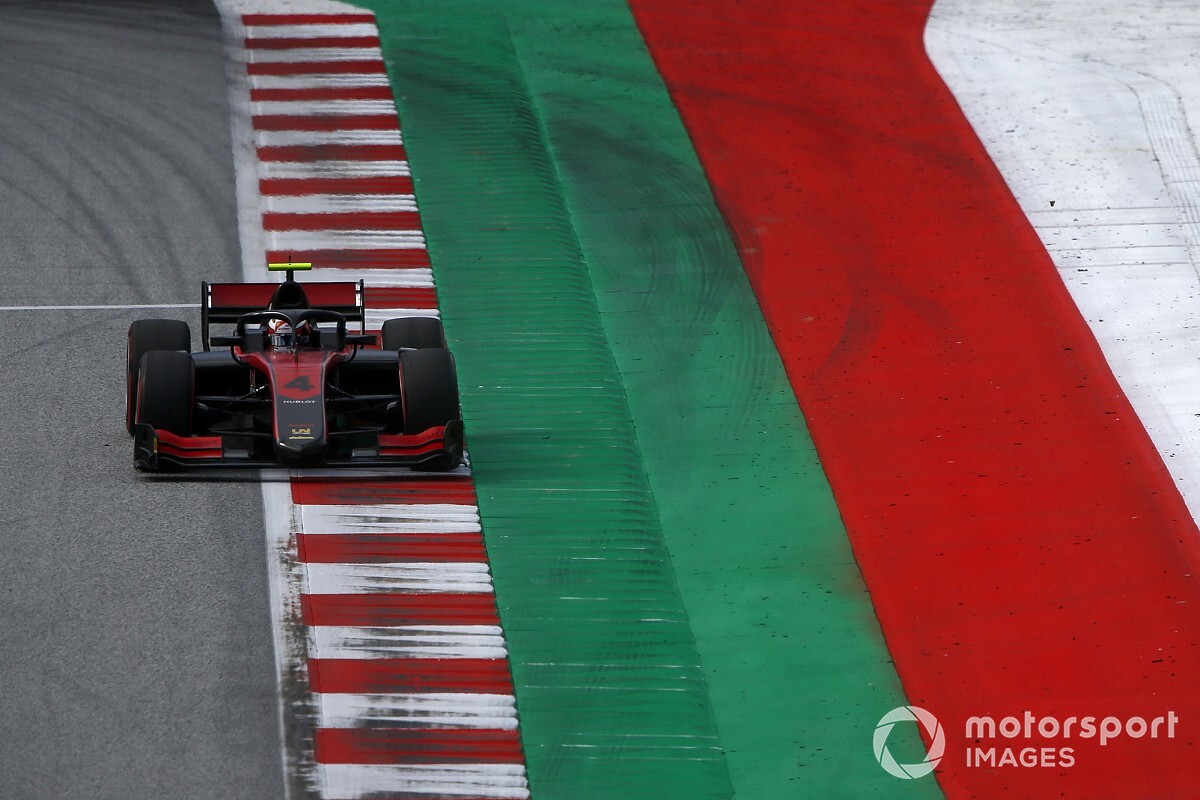 But the victory came thanks to heartbreak for Ilott’s Virtuosi teammate Guanyu Zhou, who had just emerged atop an enthralling three-way post-pitstop lead battle with Ilott and Mick Schumacher before his car slowed with what appeared to be an electronics glitch affecting the gearbox.

Poleman Zhou got beaten away by Ilott, who made a stunning start from third on the grid, but the Chinese Renault F1 Junior pulled off a spectacular move around the Turns 6 and 7 left-handers on the opening lap to assert himself at the front.

Zhou took a few laps to get Ilott out of DRS range, while Ilott in turn was shadowed by the Prema Racing car of Schumacher all the way to the pitstops.

Most of the leading runners pitted much later than usual in F2 as the softer Pirelli gave consistent performance, and it was lap 17 before Zhou surrendered a 1.1-second advantage over Ilott and pitted.

Ilott stopped the following lap and emerged in front of Zhou, while Schumacher went one lap further and rejoined ahead of both Virtuosi machines.

But Zhou, with his hard tyres up to temperature, passed Ilott into Turn 3, and then, with Ilott breathing down his neck, got ahead of Schumacher one lap later on the run to Turn 4.

Zhou quickly built a gap of over 1.0s to Schumacher, before Ilott got past the German into second place.

Then Zhou’s car slowed, and now Ilott took over from Schumacher and Marcus Armstrong, who qualified 13th but made his pitstop as early as lap seven in order to get into clear air.

Shortly afterwards the safety car was called, after Artem Markelov ground to a halt by the side of the track, and following two laps under caution there was a 10-lap dash to the finish.

A mistake from Schumacher at the Turn 7 left-hander on the first lap of the restart sent him flying into the gravel, from where he re-emerged 13th.

And, with Armstrong struggling on his fading tyres and holding up the pack behind, that allowed Ilott to build a healthy advantage to take the flag by 8.8s.

Armstrong came under attack from Prema’s Robert Shwartzman, who felt he lost time at the pitstop with the left-front wheel taking longer than expected to change.

But the reigning FIA Formula 3 champion couldn’t probe an opening, despite his tyre advantage, and did not want to try anything too risky.

This also allowed ART’s Christian Lundgaard and the DAMS machine of Dan Ticktum to latch onto the train, and Ticktum tried an audacious move on the Dane for fourth on the final lap at Turn 4 that narrowly failed to come off.

The safety car massively helped Giuliano Alesi, who along with HWA Racelab teammate Markelov had gone for an alternative strategy of starting on the hard tyres and switching to the softs.

Alesi was 11th at the safety car, but burned through to sixth, passing Louis Deletraz (Charouz Racing System) with three laps to go.

MP Motorsport pair Felipe Drugovich and Nobuharu Matsushita converged from the front row and the back of the grid respectively to take eighth and ninth, with the final point going to Trident’s Roy Nissany, who held off Schumacher.

Luca Ghiotto failed to even make it to the grid before his Hitech GP car failed, while Zhou finished one lap down.