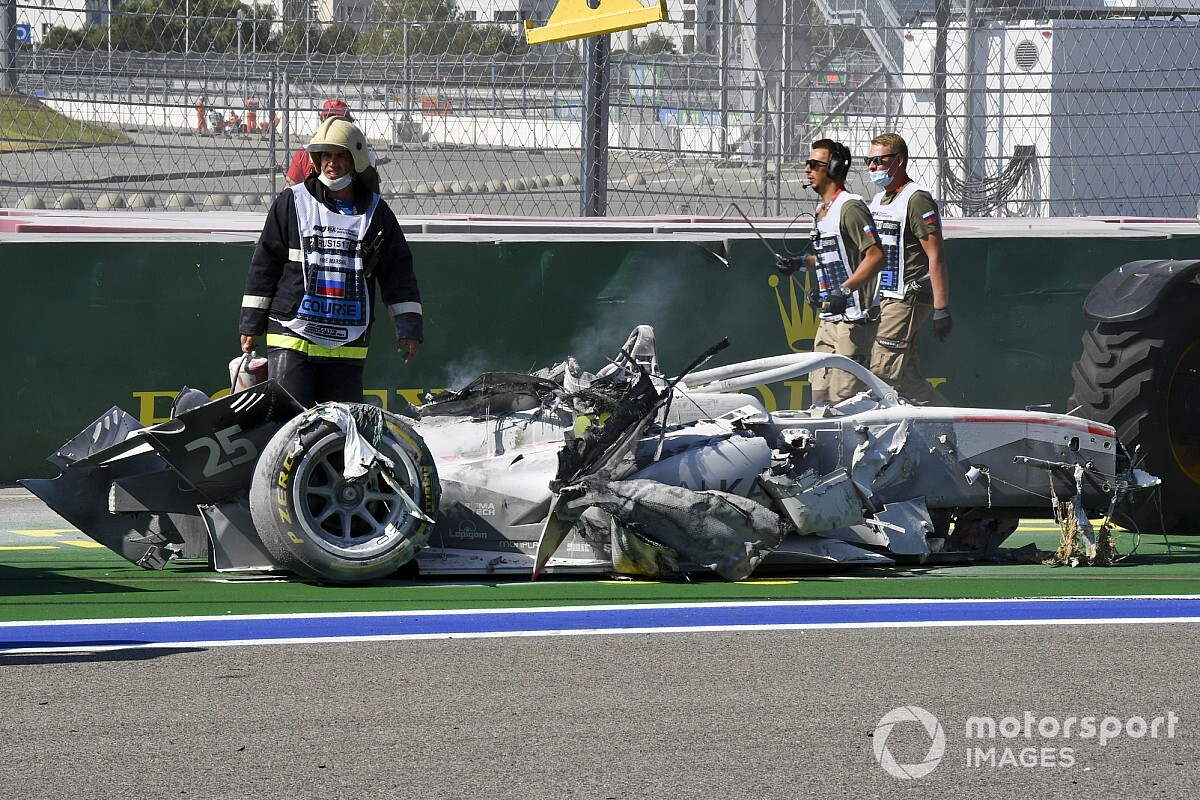 Jack Aitken has revealed that a puncture caused his high-speed crash with Luca Ghiotto that brought an early end to Sunday’s Formula 2 sprint race at Sochi.

Aitken and Ghiotto were battling for fourth position in the early stages of the 21-lap contest when the Hitech driver set a chain of events by pulling off a move on his Campos rival at Turn 2.

Aitken got a better exit coming out of the corner and drew alongside him, the two separated by a few inches as they tackled the long Turn 3 left-hander.

Prior to their race-ending collision, there was a light contact between the two drivers, which caused a right-rear puncture on Aitken’s Campos, something that wasn’t easily visible on TV cameras.

This left the British driver powerless to prevent himself from sliding into the path of Ghiotto, the contact leaving the Hitech driver briefly airborne before sending him straight into the Tec-Pro barriers.

Both tyres on the right hand side of Aitken’s car were ripped off the wheel rims in the incident and he himself clattered into the barriers a few metres away from Ghiotto’s crashed car.

Both drivers escaped unscathed from the incident, but Ghiotto’s car later caught fire, presumably due to an oil leak caused by the scale of the impact, while Aitken’s Campos also took significant damage.

The race was red-flagged immediately and never restarted, the stewards concluding that there was not sufficient time to repair the barriers with the Formula 1 Russian Grand Prix scheduled just over two hours later.

The results were declared from the end of lap 5, which allowed Aitken and Ghiotto to remain classified - the two finishing fourth and fifth respectively.

Speaking after the race, Aitken revealed he attempted to slow down the car when he realised he had sustained a puncture, but ultimately that wasn’t enough to prevent a collision with Ghiotto.

“So Luca and I were fighting at Turn 2, Came out and I was on the inside of Turn 3, started to pull ahead a little bit and he was still alongside me but behind," Aitken told Motorsport.com.

“I felt a really small touch on the rear and half a second after that I just couldn’t hold the car to the inside anymore and it felt like the rear was losing pressure.

"Initially you have the touch you don’t think anything about it. And then I felt the car start to bottom out on the ground then obviously lose steering.

“At that point I started to slow down the car, we can see in the data I brought the speed down a fair bit.

"[I was] slowing the car down enough for him to just get past me and when we touched it took the front right tyre of the rim as well. So I wasn’t slowing down at all when I was heading to the barrier and Luca was obviously up in the air. So we were in the same situation.”

“It’s just one of those when you are both trying to stay on the racing line as much as possible and just about unlucky that it was such a high speed part of the track and the touch caused a puncture."

Aitken said he knew he was going to have a huge impact with the barriers the moment he collided with Ghiotto, revealing he was travelling between 230-250km/h when he hit the Italian’s car.

“I mean I felt the car losing control," he said. "I sort of realised what was going to happen. First of all, I touched Luca for a second time and you don’t usually have a lot of time to think about situations, it usually just happens before you know it.

“But before I just hit the barriers and went underneath it, I realised it was going to be quite bad. It was quite a big hit for both of us, quite lucky to walk away with nothing more than being a bit banged up. But yeah, it was pretty scary.

“At a point where I saw this...lose the rear, the puncture, we were doing 250 or 230km/h and at the point I hit the wall I was doing 195km/h. So pretty thankful that we both walked away to be honest."