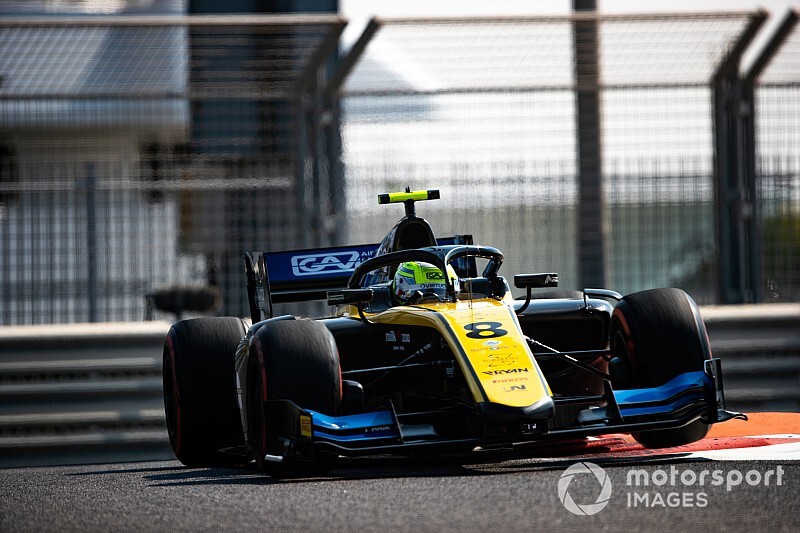 Luca Ghiotto took a convincing win for UNI-Virtuosi in his final Formula 2 race at Abu Dhabi, the last of the 2019 season.

Polesitter Giuliano Alesi, son of ex-F1 driver Jean, made a great start and his lead was 1.7 seconds at the end of the first lap. But by the eighth lap of 22, Ghiotto had eradicated the Ferrari junior’s lead and swept through at Turn 11.

Ghiotto extended his lead to 2.3s after the following lap and the Italian breezed off into the distance, his victory securing him third place in the championship after he had previously lost the spot to Saturday race winner Sergio Sette Camara.

DAMS' Nicholas Latifi was under pressure for second in the championship from Ghiotto, but did what was needed to as he took second in the race and set the fastest lap to add two bonus points to his total in his last race before he joins Williams in Formula 1 next year.

Latifi’s teammate Sette Camara started eighth, dropped back to ninth but raced up through the order in impressive fashion, Turn 11 his favourite chosen passing spot.

He stalked Ferrari junior Callum Ilott in the closing five laps, and Ilott’s Sauber Junior Team stablemate Matevos Issakyan had looked to give Ilott a reprieve as he stopped on track and a virtual safety car was called.

But the race went green with two laps to go and Sette Camara sealed the move at Turn 8 as Ilott got sideways under braking, his tyres clearly gone.

Ilott, who will replace Ghiotto next year at Virtuosi, headed fellow Ferrari junior Alesi home in fourth to finish off his rookie F2 season.

Carlin drivers Louis Deletraz and Nobuharu Matsushita battled all race, and diced right up until the flag as Deletraz’s move at Turn 8 just made the difference as he took sixth.

Aitken received a five-second penalty for leaving the track and gaining an advantage and finished 10th, while Schumacher received the same time penalty for a VSC infringement. That gave Guan Yu Zhou of Virtuosi to the final point for eighth.

Nyck de Vries' nightmare weekend continued as ART Grand Prix struggled with its set-up, the 2019 champion failing to score a top 10 in the last weekend of the year.

Piquet to test for Sauber as he weighs up F2 move