The final Ferrari North America Challenge race of the 2013 season will take place at the Circuit of the Americas in Austin, Texas on November 15-17, 2013. 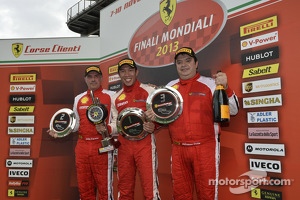 Cheung piloted his #377 Ferrari 458 Italia to first place in two of the Ferrari Challenge North America Trofeo Pirelli races, “my last Ferrari Challenge race was one year ago. To come back and win at the World Finals is extremely satisfying. Because of the unique gridding procedure, I had to manage difficult traffic conditions throughout the race. However, because of our team's setup, I was able to maintain the tires and keep pace with the leader. When the opportunity arose, I took advantage situation and finished on top,"

Giacomo Mattioli, team principal of the 2013 Grand-AM GT championship-winning Scuderia Corsa said, “what a great weekend for our drivers! Harry Cheung drove a hard charging race through the field to win both North America races which is particularly rewarding considering he took a year off and this was his comeback weekend.

Christopher Rudd drove his 333 SP for the first time and enjoyed it very much while Tony Shooshani wrapped his first season in his 599 XX flawlessly. We are looking forward to the last challenge race next weekend in Austin.”

The final Ferrari North America Challenge race of the 2013 season will take place at the Circuit of the Americas in Austin, Texas on November 15-17, 2013.