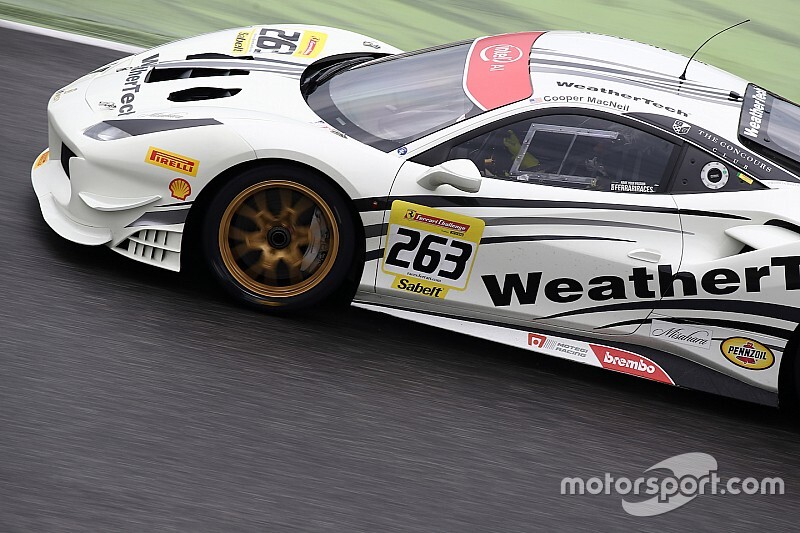 Cooper MacNeil beat title rival Benjamin Hites to pole for the final round of the Ferrari Challenge North America series at Mugello, and extends his points lead in the process.

The additional point awarded for pole gives Scuderia Corsa driver MacNeil, who was awarded victory in race one after Hites (TR3) was penalised for overtaking under safety car conditions, a 13-point advantage over Hites. There are 20 points available for victory.

Both MacNeil and Hites stayed in the pits at the start of the session, as Coppa Shell champion Mark Issa (Ferrari of Atlanta) set the early pace.

Then it was MacNeil’s turn to set a time, and his 1m52.139s pushed Hites back to second before a spin for Eileen Bildmann brought out the red flags.

MacNeil elected to wait to see if Hites could knock him off the top spot and did not appear again as Hites improved to a 1m52.927, 0.788s short.

Issa remained the top Shell competitor, but was demoted to fifth by the end behind Pirelli-Am pole-sitter Ziad Ghandour and Ross Chouest.

Ghandour, who also won his class in race one, moves one point clear of eighth-fastest Neil Gehani (Continental AutoSports) in the class championship as a result.

Tenth on the grid and Shell-am pole for Brad Horstman (Riley Motorsports) reduces his deficit to series leader and race one winner Jay Schreibman to three points.